MOSCOW (AFP) - A Russian court on Friday (June 7) fined a fishing firm for illegally capturing killer whales and keeping them in an overcrowded "jail" in the country's far east.

The company that supplies sea mammals to aquariums is one of four firms keeping 10 killer whales and 87 Beluga whales in a controversial facility near the port town of Nakhodka.

Media have nicknamed it a "whale jail" due to its crammed pens and the company's controversial plans to sell the animals to aquariums from nearby China.

A district court in the far eastern city of Vladivostok ruled that the White Whale company violated fishing regulations when it captured three killer whales, also called orcas, and ordered it to pay a fine of 28.1 million roubles (S$590,00), news agencies and activists said.

The fate of the Russian orcas and Belugas - highly intelligent and social marine mammals - has scandalised the international community, with scientists and celebrities calling for their release.

Laws regarding the capture and keeping of marine mammals in Russia contain multiple loopholes.

The fishing firms have argued they had the proper paperwork and planned to deliver them to aquariums abroad. 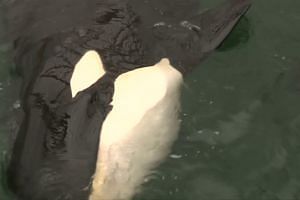 The Russian government has promised to release the animals, but is not clear how and when this will be done.

This week, Environment Minister Dmitry Kobylkin said that the animals will be released in "July or August", though previously officials named May or June.

Russia has for years been the only country where it is legal to capture live killer whales, most of which are the seal-eating variety of the species that scientists say is rare and must be protected.

People increasingly oppose using such sea mammals for entertainment in the West, but in China the industry is booming and many new facilities are under construction.