MOSCOW (AFP) - Russia has not asked to rejoin the group of the world's leading economies and is perfectly happy working with the larger Group of 20, Foreign Minister Sergei Lavrov said on Saturday (June 9), a day after US President Donald Trump called for Russia's return.

Lavrov said on national television that Russia "never asked anyone to return" to the Group of Seven (G-7) following the 2014 decision to suspend Russia over Moscow's annexation of Crimea.

Ahead of the annual meeting of G-7 leaders, Trump said Russia should be allowed back, a suggestion quickly rejected by Britain, France and Germany.

Lavrov said Russia is "working fine in other formats" such as the G-20, Tass state news agency reported.

"In the G-20, ultimatums don't work, you need to reach agreements there," said the Russian foreign minister. The G-20 "is a mechanism to reach consensus. I think this is most promising format for the future," he added.

Russia has bridled at Western sanctions over Crimea, but has not sought to compromise to rebuild ties.

Relations with the West have become even more strained in recent months after the poisoning in Britain of a Russian former double agent and his daughter, an attack London has accused Moscow of being behind. 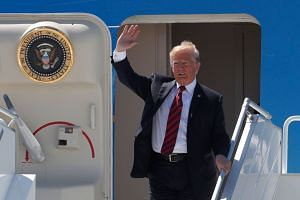 However, the Kremlin acknowledged on Saturday that President Vladimir Putin discussed during a visit to Austria earlier this week the possibility of Vienna playing host to a summit with his US counterpart Donald Trump.

Putin said in a Russian television interview that a meeting with Trump would be "useful."

"Dialogue may prove to be constructive," he said in the interview, the full version of which was released on Saturday.

He added that Russia was ready to "develop, deepen and normalise ties with the United States," noting that the next move was for Washington to make.