BERLIN - With a vibrant cultural scene, hip techno clubs and lively start-up scene, Germany's capital Berlin has been a magnet for visitors and investors alike.

But the city that was once affordable is now groaning under the weight of a severe housing squeeze which saw prices climb more than 20 per cent in 2017.

The average property price, which increased by more than 120 per cent since 2004, has put a squeeze on rent as well.

The city's government wants to fight back by capping rents at a maximum of just under 10 euros (S$15.17) per square metre.

Berlin is not the only metropolis to directly intervene in the real estate market.

Spain has imposed restrictions on the accommodation platform Airbnb by restricting the number of properties that can be rented, while New Zealand is fighting housing speculation by banning foreign investors from buying existing residential property.

Meanwhile, Denmark is acting against those who let buildings sit idle and unoccupied by barring foreigners from buying property.

However, Berlin's move is more drastic.

If a law proposed recently is passed for the city, rents can only range between 5.95 euros and 9.80 euros per square metre, depending on the date of first occupancy and the state of the flat.

Existing contracts may also have to be scaled back if more than 30 per cent of an overall household income is spent on renting the flat.

The city's government - a coalition of left, green and the social democratic party - only a few months ago decided to freeze rents in the capital for the next five years. Berlin is the first German city to do this.

Many were furious with the city's plans to cap rent, with liberal and conservative politicians crying foul.

To ensure affordable housing, more than 80 housing cooperatives in the city built about 186,000 cooperative apartments over the years, largely on state-owned land. These flats account for more than 11 per cent of all rental housing.

But the move by the city to suppress rent even upset the heads of these cooperative housing companies.

Mr Axel Gedaschko, president of the Federal Association of German Housing and Real Estate, said, that the proposal "completely overshot the mark and would primarily affect those who invest sustainably and responsibly in the housing market".

While it is true that a significant number of investors, in particular those from abroad, had been investing heavily in Berlin with the goal to benefit from rising real estate prices, most landlords did it to safeguard their savings and retirement.

These ordinary landlords feel the new legislation, if passed, lumps them together with ruthless speculators. They had invested in the real estate market because their savings earned little interest and the stock markets were too volatile.

The city's dire housing situation is not just because of the high inflow of foreigners - with about 40,000 arriving each year - but also as a result of a number of fateful decisions made in the past.

To fill state coffers, the chronically poor city administration between 1990 and 2005 sold close to 200,000 city-owned flats to private investors. Today, those apartments that could have brought some relief to the market, are not available as cheaply.

In the past few years, the city also almost doubled the land transfer tax it receives when selling land.

This has added to the overall development cost and impacted rent.

In addition, current legislation allows the so-called "social commitment" in providing affordable housing to expire after 15 to 25 years.

This rule states that apartments that at least in part were built with public money have to be offered at low rates. After the expiration, however, rents for those apartments can be set by the market.

On average, rents in Berlin are still relatively low. At 6.72 euros per square metre in Germany's capital, rent is way below what tenants have to pay, for instance, in Hamburg (8.44 euros) or Munich (11.69 euros).

However, monthly rents have more than doubled over the past 10 years.

Afraid of rents climbing further, tenants are not moving out because in Germany, it is difficult to terminate an existing rental contract or raise rents for current tenants.

The home ownership rate in the country is at 45 per cent - the lowest in all of Europe. But in Berlin, only 15 per cent of the apartments are owned by residents.

A cap on rents may significantly impact the market. Economists expect that private landlords in particular will try to sell their properties.

Supply would grow and prices will likely stagnate or even fall. Owners who are not in financial difficulties may also sell their property before prices fall.

Many experts are now highlighting Austria and its capital Vienna as shining examples of affordable housing.

Half of all Austrians live in their own homes, while more than half of the tenants live in subsidised flats or houses. 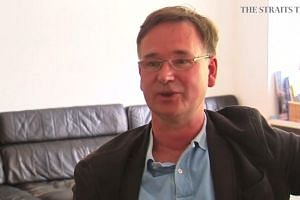 In order to make affordable housing available for as many people as possible, two-thirds of newly designated building land in Austria is retained for subsidised housing.

The rents in municipal and subsidised housing are strictly regulated with upper limits. However, there are no time limits for social commitments and no broker commissions, deposits or surcharges, as are customary in the private sector.

Subsidised housing does not only mean lower prices for the tenants.

A large supply of affordable housing can dampen the average price of private budget apartments since they have to compete with public housing.

Berlin, however, is not Vienna.

At a little less than 2,000 euros (S$3,034) per month, the average household income in Germany's capital is quite low.

One reason for this is the city's weak industrial base due to decades of being walled-in during the Cold War.

Experts believe that it will take many more years until residents eventually start buying their own apartments.