LONDON (REUTERS) - Armed with screwdrivers and a zeal for change, a growing global movement is urging electronics giants to make devices that last longer and are easier to fix to cut the environmental fallout of the tech boom.

From repair cafes to e-waste recyclers, social enterprises are leading a "right to repair" campaign, exploring commercial models to reduce the human and environmental impact of the electronics supply chain and its ever-growing waste.

The consumer electronics industry is growing at a rapid pace, as technology advances and costs drop.

According to a forecast from Gartner, 2.3 billion PCs, tablets and smartphones will be shipped in 2019.

People not only buy more devices, they abandon them quicker, increasing the mining of raw materials and landfill waste.

"It is a huge issue, considering how many resources go into the manufacturing of these machines. Every smartphone, every TV monitor, comes with an enormous ecological footprint," Ruediger Kuehr, director of the e-waste programme at the United Nations University (UNU) told the Thomson Reuters Foundation.

"There needs to be substantially more done to tackle the e-waste issue. We have to seriously consider pushing repair, refurbishment and reuse, but this is so far unfortunately not on the political agenda," said Kuehr.

GLUED TO A SCREEN

Devices are also becoming more complicated to repair. Spare parts are hard to source, repair instructions scant, and components are often glued together.

So it is often cheaper to buy anew, which boosts sales for a host of big manufacturers, be it Microsoft or Amazon.

"Once you buy a product or device, then you are the owner of it and that also should mean you decide when and where and how to repair it," Eva Gouwens, chief executive of Fairphone, which bills itself as an ethical manufacturer, told the Thomson Reuters Foundation.

The Amsterdam-based social enterprise designed a smartphone that is easier to open, repair and upgrade without expert help.

"Currently the average lifetime of a mobile phone is 20 months, so if you can extend that to three years, imagine the impact on e-waste and CO2 emissions," said Gouwens. 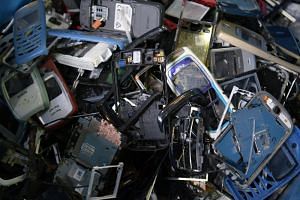 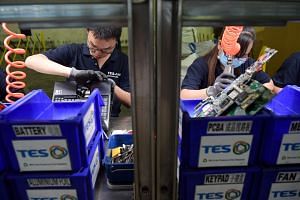 Time to pick up e-waste mess

What Singapore can learn from Sweden's e-waste recycling push

The EU will introduce similar legislation in 2020.

Its proposals, however, only apply to lighting, white goods and televisions. They also only let accredited repairers, rather than independent repairers and individuals, fix such devices.

Social enterprises active in the sector face a David and Goliath-style battle given the heft of giants such as Apple and Samsung, which market their devices as a high-tech dream.

In 2018, Apple sold about 218 million iPhones, according to statistics site, Statista. By contrast, Fairphone has sold 160,000 devices since 2013 and has not yet turned a profit.

Having just raised €7 million in investment, Fairphone plans to scale up the business this year.

"Some people will always go for the latest and greatest," said Gouwens. "But we think we can convince people that a good quality, functioning phone, with the aim to change industry into a more sustainable industry, is a good deal for them."

Airedale Computers - a social enterprise based in Yorkshire, in the north of England - refurbishes used computers.

Its chief executive, Neil Kennedy, is not convinced people will have the know-how or desire to repair their own devices.

"The technology is beyond many people's grasp to repair. People don't have the interest. They want to open a box, press a button and make it work," he told the Thomson Reuters Foundation.

Across Europe and beyond, social enterprises and charities have set up repair cafes, where locals bring in broken devices for free or affordable fixing to cut waste and boost recycling.

While wealthy Europe and the United States are mulling over laws that would push consumers to repair their electronics, "make do and mend" is the norm in many poorer parts of the world.

Its chief executive and founder, Roy Mwangi Ombatti, told the Thomson Reuters Foundation that in Kenya, and other parts of Africa, there is a growing market for repair and resale.

"Those of us who are confident enough to take the machines apart and reuse are seeing opportunities and trying to capitalise and make money from them," he said. "It has stemmed out of a culture we have of repurposing and reusing waste."

According to the UNU, only 20 per cent of e-waste is recycled properly. The remaining 80 per cent ends up in homes, landfills or is shipped, often illegally, overseas and informally recycled.

E-waste contaminates the soil and groundwater supply and exposes people to hazardous chemicals.

"What we are doing now is an opportunity that has stemmed out of a problem, but we shouldn't have to be dealing with a situation like this," said Ombatti. "If they care about the environment, they need people addressing the last mile."