PARIS (AFP) - The world may be seriously underestimating the amount of plastic waste along its coastlines, researchers said on Thursday (May 16) as they unveiled findings showing hundreds of millions of plastic fragments on a remote Indian Ocean archipelago.

A team of experts travelled to the Cocos Islands, a group of 27 small atolls 2,100 kilometres west of Australia and found an estimated 414 million pieces of plastic.

In all, the plastic fragments would weigh around 238 tonnes, the team said.

But according to lead study author Jennifer Lavers, the fragments on the surface of Cocos Island beaches - and beaches around the world - may just be the tip of the iceberg.

"I've been working on remote islands as a marine biologist for 15 years or so and all of them have at least some debris, so I've come to expect it," she told AFP.

"One of the big surprises was that when I was digging down in the sediment to look at how much was buried and where, the quantity sometimes did not drop off with depth."

Dr Lavers and the team dug multiple holes across beaches on the Cocos Islands, and found plastics, mainly in the form of small or microparticles, throughout the sand layers.

They estimate that the true amount of plastic pollution on the beaches surveyed may be as much as 26 times greater than the fragments visible on the surface.

The study, published in the journal Nature Scientific Reports, concludes that global plastic waste surveys "have drastically underestimated the scale of debris accumulation".

Plastic production has exploded worldwide in recent years, with half of all plastics produced in the last 13 years.

Mankind throws millions of tonnes of plastic into the sea every year, and much of it gets washed back ashore onto beaches, where it poses a risk to wildlife. 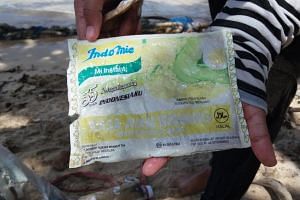 It can also enter the food-chain in the form of microplastics, which have been found at all ocean depths and latitudes.

Dr Lavers, from the Institute for Marine and Antarctic Studies at the University of Tasmania, said such plastic concentrations found on a remote group of islands was deeply concerning.

"While the five oceanic gyres or 'garbage patches' tend to garner a lot of research and media attention, the Cocos Islands are not located near or within one of these gyres," she said.

"Plastic is everywhere, in all corners of the ocean, being distributed by current systems big and small."

Significantly, the team estimated that as much as 25 per cent of the plastic items surveyed on Cocos were disposable or "single-use", such as food packaging, straws, forks and knives and toothbrushes.

In March, nations failed to agree to a timetable to phase out all single-use plastics, opting instead to "significantly reduce" their production.

Dr Lavers said industry- and society-wide changes in behaviour - from production, to consumption and re-use - were needed to stem the plastic waste epidemic.

"Some islands have significant quantities to the point that it forces one to pause and consider all aspects of their life, from the simple items used each day (eg. to brush one's teeth) to how I communicate the outputs of my research," she said.

"These islands change you."