LONDON (BLOOMBERG) - In the see-saw world of British politics, Prime Minister Theresa May is on the way back up, buoyed by international support for her stand against Russia, just as opposition Labour Party leader Jeremy Corbyn is struggling with accusations of anti-Semitism.

Mrs May's patient and sometimes painful strategy of staying close to Mr Donald Trump's administration seemed to have paid dividends on Monday (March 26) when he ordered 60 Russian diplomats expelled from the US over the nerve agent attack on an ex-spy on British soil.

Meanwhile, Mr Corbyn, whose internal critics have largely bitten their tongues since his unexpectedly good election performance in 2017, was the target of a demonstration outside Parliament led by Jews - and joined by some of his own lawmakers - who said he is too tolerant of anti-Semitism in his party.

"He's got to take personal responsibility," said Labour lawmaker Ian Austin, who joined several of his colleagues, including one-time leadership contenders Chuka Umunna and Ms Liz Kendall at the protest, which filled Parliament Square. "He's got to apologise personally and he's got to kick these people out of the party."

The protest was called by Jewish community groups who ran out of patience with Mr Corbyn when he was forced to apologise for his opposition to the removal of an anti-Semitic mural in east London in 2012.

His defence of the painting, in a Facebook posting, was an example of "repeated institutional failure to properly address Jewish concerns and to tackle anti-Semitism", the leaders of the Board of Deputies of British Jews and the Jewish Leadership Council said in an open letter. "Again and again, Jeremy Corbyn has sided with anti-Semites rather than Jews."

Ms Julie Pelta, 41, a heathcare worker who joined the protest, said she might have been persuaded to vote for the party in the past, but Mr Corbyn has made her "more vehemently against Labour than I've ever been". 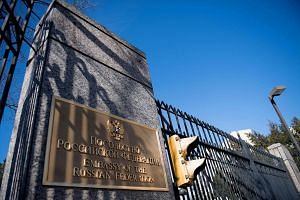 US, EU to expel more than 100 Russian diplomats over UK nerve attack

Mr Corbyn on Monday afternoon issued the latest of a series of statements attempting to close down the dispute. Anti-Semitic conspiracy theories are "the socialism of fools", he wrote, committing himself to being "a militant opponent of antisemitism".

But his opponents weren't deterred. As protesters chanted, "Oh, Jeremy's a racist," to a tune more often used by his supporters when chanting his name, Mr Corbyn's reception inside the House of Commons was no less cutting.

Lawmakers - including some from his own side who hadn't joined the protest - made clear their displeasure at the Labour leader's stance on the attempted murder of former Russian spy Sergei Skripal and his daughter in Salisbury, western England.

He looked uncomfortable and was reluctant to take interventions as he faced open ridicule at the start of a debate on relations with Russia.

Labour lawmaker John Woodcock, a long-time opponent, said his leader's claim that he had been a critic of President Vladimir Putin for 20 years was "just not true".

Mr Corbyn refused to join Mrs May's government in blaming Mr Putin for the Salisbury attack, saying only that Russia had "a direct or indirect responsibility", keeping open his earlier suggestion that rogue elements or gangsters may have been responsible.

He called for Mrs May to crack down on Russian oligarchs in Britain and made the case for maintaining relations with the Kremlin so there can be "a constructive and robust dialog".

"We once stood as allies with the Russian people, millions of whom died in a mutual struggle for survival against the Nazis during the Second World War," Mr Corbyn said. "If we can come through this era of division and hostility, we can, I am sure, be allies again."

In a sign of the cross-party hostility aimed at Mr Corbyn, Deputy Speaker Eleanor Laing, who was overseeing the debate, at one point told lawmakers: "We cannot have both sides of the House shouting at the Leader of the Opposition."

Tuesday's newspapers didn't relieve the pressure on the Labour leader. "Enough is Enough Mr Corbyn!" the Daily Mail said on its front page alongside a picture of protesters outside Parliament.

The Times emphasised the urgency of his task, saying, "Anti-Semites will Destroy Labour, Senior MPs Warn."

Mrs May has had little to cheer about in the last year, with her expected political lifespan sometimes measured in days. But in Parliament on Monday, she for once enjoyed the wholehearted support of her Conservative Party - as well as many in Labour.

While Britain would like "constructive" relations with Russia, it needs to "face the facts", she told lawmakers.

"President Putin's regime is carrying out acts of aggression against our values and interests within Europe and beyond. The challenge of Russia is one that will endure for years to come," she said. "As a European democracy, the United Kingdom will stand shoulder to shoulder with our allies in the European Union and Nato to face down these threats together."