BERLIN (AFP) - Leaning over his sewing machine in the workshop of the small Berlin-based company called mimycri, Mr Khaldoun Alhussain concentrates as he stitches a piece of grey rubber.

A border of yellow thread takes shape on the material that he works with an expert hand.

The grey material from rubber dinghies, abandoned by migrants on the beaches of Greek islands, is finding a second life in Berlin.

It is transformed by refugees into different sorts of bags, sold on the Internet.

Mr Alhussain, a 34-year-old Syrian, is familiar with the robust and weather-resistant rubber that he now works with after being recovered in Greece.

Four years ago, he climbed into a makeshift boat made of the very same material to reach the Aegean island of Chios from the Turkish coast.

"There were many of us and the crossing was very, very dangerous," said the tailor, who learnt his trade in garment factories in Damascus before he left to seek asylum in Germany.

Mimycri recovers inflatable rafts, abandoned on the shores of Chios and the nearby island of Lesbos, which both bore witness to the 2015 migration crisis when hundreds of thousands of refugees landed on Europe's beaches.

At the peak of the crisis, Greece recorded up to 7,000 arrivals a day.

While the number of crossings has slowed considerably since an agreement between the European Union and Turkey in 2016, it still averages around 100 people per day.

On the spot, non-profit organisations recover the boats that litter the coast, along with discarded life jackets and clothing.

"We recover 90 per cent of the boats stranded on the coast," said Mr Toula Kitromilidi, Greek coordinator of the NGO Chios Eastern Shore Response Team.

"The rest are used by the locals," he added, indicating how, for example, farmers convert the boats' rubber panels into tarpaulin covers.

Cut into large strips, the panels are sent to Berlin, cleaned and transformed into useful bags.

Customers "buy these bags because they tell a story, because they are more than just something you own", said Ms Vera Guenther, one of mimycri's two founders, in her bright workshop.

Heavy sewing machines hum in the background under shelves filled with rolls of rubber.

Each segment is unique, sometimes with stripes or marks that often tell their own tragic stories.

The company's customers, who snapped up some 120,000 euros (S$188,092) worth of its wares last year, can indirectly learn "what is happening in Syria...and how many people have died or are still dying there", added Mr Alhussain. 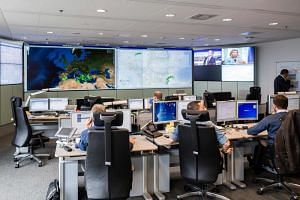 A splintered Europe not ready for new refugee crisis

His goal is to bring his mother to Berlin from Syria where she is sick and alone.

As for the inhabitants of the Greek islands, "they are very happy (with our work) because they do not want their beaches to be covered with plastic waste", said Ms Guenther.

She gave up her job in the environmental sector to run mimycri.

In total, the company sells 11 products, with 3 per cent of sales donated to NGOs in Greece.

Its latest creation is a toiletry bag, which, like all the products it sells on the Internet, is also sold in some shops in Berlin and Munich.

Ms Guenther, 32, was among the Germans who came to offer their help to refugees as they arrived in droves at the country's train stations in the summer of 2015.

"I wanted to be part of this new Germany that welcomes people who have lost their belongings, their homes and sometimes also their families," she said.

During the winter of 2015-16, she left for Chios to help frightened migrants landing on the beaches after often harrowing journeys.

With a German passport, she could make the crossing from the Turkish coastal city, Izmir, to the Greek island in 30 minutes for 14 euros "while drinking a beer and taking a little nap".

She was profoundly aware that Syrians, Iraqis and Afghans were risking their lives on makeshift rafts by paying at least US$1,000 (S$1,386) to human traffickers.

With her partner, Ms Nora Azzaoui, she spent several months on the island and returned to Berlin with a section of rubber in her luggage.

It was transformed into a bag and the business idea was born.

The two young women managed to raise 43,000 euros in a crowdfunding scheme to bring their dream to life.

Now, the small company employs five people, including a Syrian and a Pakistani.

"We want to change the way we look at refugees," said Ms Guenther. "These are people...who want to have a job, a house, just like all of us."