PARIS (AFP) - French prosecutors on Friday (Feb 16) said they had dropped an investigation into claims that Budget Minister Gerald Darmanin raped a woman who sought his help in having her criminal record expunged in 2009.

The Paris prosecutor's office said a preliminary probe had failed to establish "the absence of consent on the part of the complainant" or that she was acting "under constraint, threat, surprise or any sort of violence towards her."

Darmanin, one of the star performers in President Emmanuel Macron's centrist government, had furiously denied pressuring the former call girl into sex in return for a promise to help her clear her name.

The case comes in the midst of a global outpouring of accounts of sexual harassment and rape unleashed by the Hollywood producer Harvey Weinstein affair.

Sophie Spatz, 46, made a first complaint against Darmanin in mid-2017, shortly after he was named minister, but the investigation was closed when she failed to attend questioning by the police.

In mid-January she renewed her complaint, triggering a new probe.

Spatz said she had asked the help of 35-year-old Darmanin - in 2009 a legal advisor in the ruling right-wing UMP party - to try to have a suspended sentence lifted for blackmail involving a former boyfriend. 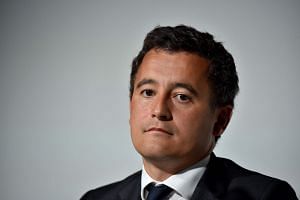 Macron minister refuses to quit over rape charge he denies

This week, a second woman brought a complaint against Darmanin, saying he used his political position to ask for sexual favours while mayor of the northern city of Tourcoing between 2014 and 2017 - allegations he also denied.

The government has closed ranks around both Darmanin and popular Environment Minister Nicolas Hulot, who faced allegations last week that he raped the granddaughter of former French president Francois Mitterrand in 1997.

The allegations against Hulot were never investigated, with his accuser making the complaint after the deadline to report the alleged assault had passed.