In a letter to the Privy Council, a formal advisory body to the monarch comprised of senior politicians, judges and bishops, the queen confirmed her approval of the wedding of Harry, the fifth-in-line to the throne, and Markle, star of US TV drama Suits.

"I declare My Consent to a Contract of Matrimony between My Most Dearly Beloved Grandson Prince Henry Charles Albert David of Wales and Rachel Meghan Markle, which Consent I am causing to be signified under the Great Seal and to be entered in the Books of the Privy Council," said the letter dated on Wednesday (March 14).

Harry and Meghan's union, like all those of the first six royals in direct line of succession, must be approved by the queen under the 2013 Succession to the Crown Act, which replaced an even more prescriptive law dating back to the 18th Century.

The move was a mere formality as the queen had already said in a statement how delighted she was for the couple and she will be attending the wedding ceremony at her Windsor Castle home, to the West of London, on May 19.

She also invited Markle to spend Christmas with the royal family at her Sandringham estate in eastern England.

Now there is only one issue that matters for many members of the public and fashionistas - when Markle joins the British royal family in less than two months' time, who will design her wedding gown?

British newspapers have been rife with rumours that she has chosen the dress and already attended her first fitting, although royal officials are keeping such details a tightly guarded secret. The public, and the fashion world, are expected to have to wait until May 19, the day of the wedding, to find out who the designer is.

"We have not put out a statement, nor commented on the wedding dress," a spokeswoman for Harry's office said. 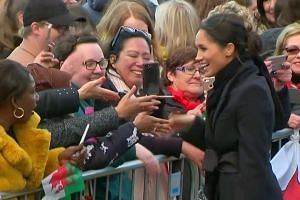 Prince Harry, Meghan Markle invite 2,640 members of the public to their wedding

Horse and carriage for Prince Harry and Meghan's wedding

Rumoured contenders include designer Stella McCartney, who was behind British human rights lawyer Amal Clooney's cream-colored trouser suit for her civil marriage ceremony to US actor George Clooney, as well as the coat Markle wore on a visit to Cardiff earlier this year.

British-Australian brand Ralph & Russo is another that has been mentioned a possible contender for the job after Markle chose a dress made by the duo for her official engagement portraits with Harry.

For fashion brands, having apparel seen on a member of Britain's royal family can lead to a spike in sales. Prince William's wife Kate has become a fashion icon since she married Harry's elder brother in 2011, with huge interest in her choice of outfits for official engagements.

British retailer Marks & Spencer received a publicity boost in January when Markle was photographed wearing one of its £45 (S$77) jumpers during a visit to a London radio station.