Halibut, lamb and lemon verbena cream were among the items on the menu at the state banquet hosted by Queen Elizabeth in honour of US President Donald Trump as part of his three-day state visit to the United Kingdom.

Mr Trump's trip was cast as a chance to celebrate Britain's "special relationship" with the United States, boost trade links in a post-Brexit world and reaffirm security cooperation ahead of the 75th anniversary of the allied D-Day landings in World War Two.

The lavish state banquet on Monday (June 3), with a four-course meal, was held at the Buckingham Palace ballroom.

In accordance with tradition, the Queen, who does not have her own place card, was at the head of the table, with her son Charles, the Prince of Wales on her left, and Mr Trump on her right.

The Queen wore an evening gown with crystal-centred daisies by Angela Kelly, which she paired with a Burmese ruby and diamond tiara.

She also wore a matching ruby and diamond necklace and earrings, as well as a white gold and platinum watch.

The first course was steamed fillet of halibut with watercress mousse, asparagus spears and chervil sauce. 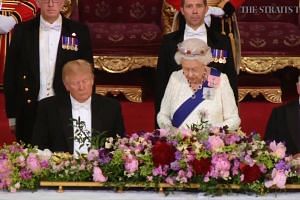 US President Trump, Queen Elizabeth hail common values that unite US and UK at state banquet

This was followed by a saddle of new season Windsor lamb with herb stuffing, spring vegetables, port sauce.

Dessert was strawberry sable with lemon verbena cream, followed by a selection of assorted fresh fruits, as well as coffee and petit fours.

The meal was served on the silver-gilt "Grand Service", originally commissioned by George IV when he was Prince of Wales in 1806. It consists of over 4,000 pieces for dining, including dinner plates and 107 candelabra.

Mrs Trump wore a Dior Haute Couture ivory silk crepe gown with silk tulle detail, according to a spokesman for the First Lady.

Various royals and other members of the aristocracy were also present.

The Duchess of Cambridge wore a white Alexander McQueen dress, with her royal orders pinned to the front. She also donned a tiara and sapphire and diamond fringe earrings.

Other royals in attendance included Prince Charles' wife Camilla, the Duchess of Cornwall, the Queen's children - Prince Andrew, the Duke of York, Princess Anne, the Princess Royal, and Prince Edward, the Earl of Wessex - and their spouses.