Minor scuffles broke out as pro-Erdogan counter-protesters walked in front of Kurdish demonstrators outside Downing Street, with police wrestling some of the ringleaders to the ground.

A Downing Street spokesman said a "frank discussion" on human rights was on the agenda for May's meeting with Erdogan.

"We've always been clear that we want Turkey to uphold its international obligations, including respect for freedom of expression and political freedoms," he said.

Queen Elizabeth welcomed Erdogan for a private audience at Buckingham Palace ahead of the May meeting.

The three-day visit comes as the Turkish leader campaigns for re-election after calling a snap poll for June 24, bringing the vote forward by a year and a half.

The move is widely regarded as a plan to shore up his power in the country and comes as international pressure mounts on the president over his suppression of political dissent. 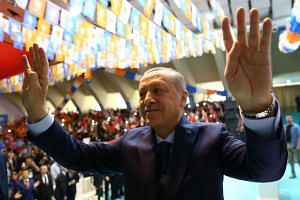 Turkey's Erdogan to visit Britain in May

German football stars under fire for posing with Turkey's Erdogan

Outside Downing Street on Tuesday, dozens of campaigners assembled in a protest organised by freedom of expression groups English PEN, Index On Censorship and Reporters Without Borders (RSF).

RSF says over 100 journalists have been arrested, 140 media outlets shut down and at least 889 press cards rescinded since a crackdown began in 2016.

"We must make it clear to our government here that we do care about the fundamental freedoms - these values that our own country is anchored upon," Reporters Without Borders UK chief Rebecca Vincent told protesters.

Calling for the release of imprisoned journalists, she added: "There is an election coming up."

"Under the state of emergency people do not have full access to independent information, so you now have an electorate that will be going to the polls again after quite a short campaign period without having the full picture."

"In light of that, for President Erdogan to be welcomed - given the red carpet - here in Britain is shameful."

The demonstrators were later joined by a larger group protesting Erdogan's treatment of the Kurds - as well as a handful of counter-protesters seemingly chanting in support of the president.

The pro-Kurdish campaigners held up placards with images of Erdogan and the word "Terrorist" across his face, as well as a flag bearing a picture of Abdullah Ocalan, the imprisoned founder of the Kurdistan Worker's Party (PKK).

The early election is set to accelerate Turkey's transition to a new presidential system approved in a referendum last year.

Critics fear the new full executive powers afforded to the president will lead to one-man rule.

Meanwhile a state of emergency remains in place in Turkey 22 months after a failed 2016 coup.

Erdogan has already stoked controversy on the trip by meeting Germany international footballers Mesut Ozil of Arsenal and Ilkay Gundogan of Manchester City.

Turkey's football chief on Tuesday condemned as "slanderous" and "unacceptable" German criticism of the meeting, with Berlin's football association head Reinhard Grindel saying the pair had been "manipulated".