LIEGE/BRUSSELS (REUTERS) - Belgian authorities faced questions on Wednesday (May 30) over why a prison inmate, suspected of links to radical Islamists in jail, was let out for a day, enabling him to carry out what police called a"terrorist attack" in the city of Liege.

The justice minister, who oversees the prison service, said he felt "responsible" for Tuesday's bloodshed in which two policewomen and a bystander were killed. The attacker was shot dead by police at a nearby school shortly afterward.

Interior Minister Jan Jambon said authorities were still examining the motives of Benjamin Herman, a 31-year-old Belgian drug dealer who had been in jail for years but was let out for two days on Monday to prepare for an eventual release in 2020.

Herman had shouted "Allahu Akbar", the Muslim affirmation of faith, during his attack and he had had contact with Islamist radicals in jail in 2016 and early 2017.

He also appeared to have followed online exhortations from Islamic State to stab police officers and use their service weapons to shoot others, prosecutors said.

A school cleaning woman who found herself "nose to face with the killer" told public broadcaster RTBF that he spared her because she was Muslim.

While he briefly held her hostage, he told her he wanted the police to "writhe; I want to make them stew." Justice Minister Koen Geens told RTBF radio he was having pangs of conscience over whether the man should have been allowed furlough.

Still reeling from the attack, residents of Belgium's third biggest city lay flowers and candles at the scene of the shooting on Wednesday, and officials held a moment of silence.

"We had all of the little ones from the high school who were evacuated," said an emotional nursery school teacher, Joelle Chalon. "I walk this way to work every day."

Authorities praised the quick-wittedness of the cafe owner outside whose bar Herman had killed the two policewomen, aged 54 and 44. By the time the killer, wielding two police pistols, came in looking for more victims, the cafe proprietor had got all of his customers into hiding.

Jambon described Herman as a psychologically unstable man who might have been on drugs, pointing to his murder of an acquaintance 50 km away on Monday night. 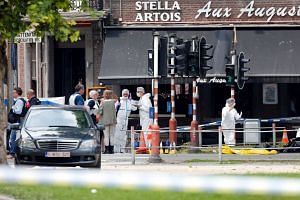 "There are signs he was radicalised in prison but is it that radicalisation which drove him to commit these acts?" Jambon said, adding that although Herman was flagged up in security reports in 2016 and early 2017, he had been a fringe figure.

Unlike the aftermath of previous suspected "lone wolf"militant attacks in Europe, there has been no claim of responsibility by Islamic State.

In and out of jail for a variety of crimes since 2003, Herman may have found a path to violence that has heightened concerns that Europe's prisons are incubators for jihadism.

It was the fourteenth time since his detention that he was granted temporary leave, Geens said. "Everyone in Belgium is asking the same question: how is it possible that someone convicted of such serious acts was allowed to leave prisons?" Deputy Prime Minister Alexander de Croo was quoted as saying.

The national crisis centre, on high alert since a Brussels-based Islamic State cell helped kill 130 people in Paris in 2015, did not raise its alert level, indicating no follow-up attacks were expected.

"I think it was just one individual who completely snapped,"said Pieter Van Ostaeyen, a specialist on jihadism. "I don't think it was an organised attack." Convicts have been behind several Islamist militant attacks in Europe. In Belgium, around 450 prisoners are deemed radical, including 46 that are seen as a threat of radicalising others, according to lawmaker George Dallemagne, who sits on several Belgian parliamentary security committees.

"We have a tragic experience in Belgium, with people entering prison as petty criminals and leaving as terrorists,"he told Reuters.