Posing with more established British royalty, Prince George stands out in his very first postage stamp alongside his father, his grandfather and great-grandmother, whose face has appeared on more stamps than anyone in history.

Perched atop a pile of foam blocks, the two-year-old sports an adorable cherubic smile while holding the hand of beaming dad Prince William.

A family portrait to mark #Queenat90.

It's the first time Prince George has appeared on @RoyalMailStamps pic.twitter.com/9xgoJwNU12

The Queen and Prince Charles are also in the picture, taken last summer in the White Drawing Room at Buckingham Palace by photographer Ranald Mackechnie.

The group photograph has been issued as a sheet that divides into four stamps, one for each of the royals, to mark the Queen's 90th birthday on Thursday (April 21). 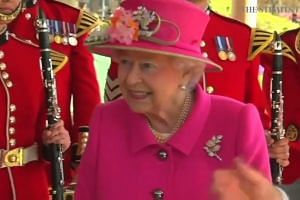 Mackechnie told The Mirror newspaper that George was beautifully behaved but "very fascinated" by the lights used for the camera set-up.

He managed to get the future King's attention for long enough to get the perfect shot in 25 minutes.

Mackechnie noted that the idea of putting the toddler on foam blocks - which cannot be seen on the stamp - came from his previous shoots involving athletes.

George's shirt and shorts are by high-end childrenswear designer Rachel Riley, according to The Daily Mail.

He also wore the same clothes in the first official portraits of his younger sister Princess Charlotte, shot around the same time as the four-generation photograph.