Prince George, now nearly three, shook hands with US President Barack Obama at the Kensington Palace while in his pyjamas and dressing gown.

The President and first lady Michelle Obama crouched down to greet the young prince on Friday (April 22), photos released by the Palace showed.

Prince George, who is third in line to the throne, was dressed in baby blue gingham pyjamas and a white bathrobe monogrammed with his name - George - just before his bedtime.

He was also wearing slippers with aeroplane motifs on them.

The Obamas are stopping by Britain on a four-day visit as Barack Obama's second term nears its end. He will head to Germany next.

Earlier on Friday (April 22), they flew to Windsor Castle by helicopter to have lunch with Queen Elizabeth II, who just turned 90 on Thursday.

They then headed to Kensington Palace, in the centre of London, for dinner with the Duke and Duchess of Cambridge and Prince Harry.

It is the first time that any of the young royals have entertained a head of state privately, the Daily Mail said.

.@BarackObama and @MichelleObama arrive at Kensington Palace for dinner with The Duke, Duchess and Prince Harry pic.twitter.com/ZdXMj24pCL

The Obamas arrived at Kensington Palace in the rain, and Prince George was spied waiting in the hallway.

"Oh look at you," Mr Obama was heard proclaiming as he walked in, CNN said.

The toddler stayed up for 15 minutes to greet the Obamas and thank them for gifts that were given to him previously, one of which was a soft toy of a Portuguese water dog - the breed that the Obamas own.

Photos also show the young prince riding on a rocking horse, a gift from the US first family when George was born.

The photogenic Prince George has stolen the hearts of many with his cherubic smile. On Thursday, his first photo for a royal stamp was released. 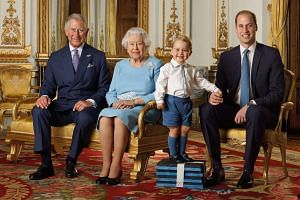 Prince George stood on foam blocks and beamed while holding the hand of his father, Prince William.

The Queen and Prince Charles are also in the picture, taken last summer in the White Drawing Room at Buckingham Palace by photographer Ranald Mackechnie.

The group photograph has been issued as a sheet that divides into four stamps, one for each of the royals, to mark the Queen's 90th birthday.