MOSCOW (BLOOMBERG) - Russians headed to the polls in presidential elections expected to hand Vladimir Putin an easy victory, keeping him in power until 2024.

Putin, 65, already Russia's longest-serving leader since Soviet dictator Joseph Stalin after more than 18 years at the helm, is seeking a fourth term amid an escalating stand-off with the West and economic malaise.

With little opposition tolerated and widespread apathy about the outcome amid stagnating living standards, the Kremlin's main task is to ensure turnout for Sunday's election is enough to give Putin's new term a stamp of legitimacy.

Officials mounted a major drive ahead of the vote to get citizens to show up at polling places, offering inducements ranging from free food to prize contests.

Struggling with a cold for much of the campaign, Putin attended few election events and, as in previous contests, dodged televised debates with his opponents.

They include Communist Pavel Grudinin, a farm boss who's defended Stalin's bloody purges, ultranationalist Vladimir Zhirinovsky, who's been trounced in past contests, and Boris Titov, who attracted ridicule for running against Putin while serving as the Kremlin's business ombudsman.

There's also former reality-TV star Ksenia Sobchak, who's run a campaign critical of Putin while labouring under accusations from opposition leader Alexey Navalny that the Kremlin encouraged her candidacy to add sparkle to the lacklustre contest. 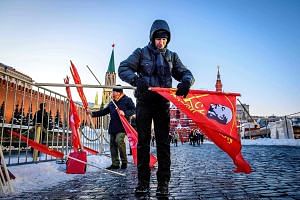 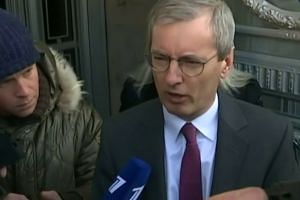 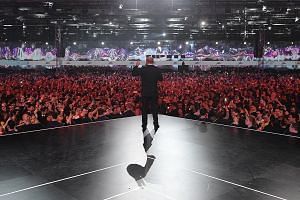 Navalny was barred from running.

Putin boycotted the debates, which dissolved into shouting and pushing among the other candidates.

With little doubt about the outcome, the Kremlin on Friday announced that Putin had already ordered his staff to draft policy decrees covering the next term.

Voting started in Russia's far east at 8am local time (4am on Sunday, Singapore time), according to reports on official news agencies. Almost 111 million Russians are eligible to vote at more than 97,000 polling stations nationwide.

Polls will close in the westernmost region of Kaliningrad at 8pm local time (2am on Monday, Singapore time), with exit poll results expected immediately.

Official results will be largely complete by Monday.

Putin will face a host of challenges in his new six-year term, as a spiralling dispute with Britain over suspected poisoning of a double agent and his daughter with a chemical weapon adds to tensions with the US and Europe over conflicts in Ukraine and Syria.

Russia, which was hit with Western sanctions over its 2014 annexation of Crimea from Ukraine that compounded a downturn provoked by plunging oil prices, is struggling to recover after the longest recession in two decades.

Russia is sliding down the world ranking and is forecast to fall to 17th from 11th among the largest economies within 15 years as it's overtaken by South Korea, Spain and Turkey among others, according to the London-based Centre for Economics & Business Research.

In what's likely his last term as he's obliged constitutionally to step down as president in 2024, Putin must also groom a trustworthy successor.

While it's not clear if any of Britain's allies will also target Russia, the nerve-agent poisoning on March 4 in the English town of Salisbury has stoked concerns.

Britain has expelled 23 Russian diplomats and Moscow on Saturday ordered an equal number of British envoys to leave Russia.

Russia also stands accused of intervening in President Donald Trump's favour in the 2016 US elections, as well as vote meddling in several European countries.