LONDON (REUTERS) - Prime Minister Boris Johnson doubled down on his Brexit promises on Tuesday (Nov 19), saying only he could take Britain out of the European Union quickly, in a testy leadership debate with opposition Labour's Jeremy Corbyn.

After the hour-long debate, polls showed the public were split over who was the victor: 51 per cent said it was Mr Johnson while 49 per cent backed Mr Corbyn - a result that analysts said reflected better on the Labour leader, who is trailing in opinion polls.

Both leaders tried to undermine the other in the first such debate before a Dec 12 election, called by Mr Johnson to break the Brexit deadlock that has hurt Britain's standing in the world and weighed on the world's fifth largest economy.

At one point, the host, ITV's Julie Etchingham, asked the two men to shake hands and promise to improve the tone of political debate in Britain, which is deeply divided since voters backed leaving the EU in a 2016 referendum.

"We certainly will come out on January the 31st, because we have a deal... that is oven ready," Mr Johnson said.

The Prime Minister is promising to implement the exit deal he negotiated with Brussels and lead Britain out of the EU by Jan 31. He pledged to meet a 2020 deadline to secure a trade agreement for Britain's long-term relationship with the EU.

But Mr Corbyn said, instead of speed, Mr Johnson was promising years more of talks to secure a Canada-style trade deal, in which he said the government planned to sell off Britain's beloved public health service. Mr Johnson denied the charge.

"The idea that the Prime Minister Boris Johnson's deal, can be dealt with and finished by the end of January is such nonsense," Mr Corbyn said to applause.

Mr Corbyn wants to negotiate a new exit deal and put it to a referendum within six months alongside the option to remain in the bloc. He said during the debate he would honour whatever the result of that vote was.

Mr Johnson countered by attacking him on his refusal to say whether he would campaign for leave or remain in any future Brexit referendum. 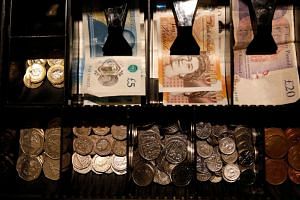 Polling conducted immediately after the debate by YouGov showed the public were evenly split.

"On balance, this is probably better for the Labour leader. Why? Because a dead heat when you are significantly behind in the polls is probably better news for you that the person who is leading," said YouGov political research manager Chris Curtis.

Polls looking to gauge how the public intend to vote put Mr Johnson's Conservatives as much as 18 percentage points ahead of Labour, but the election is difficult to call because of pacts and alliances on both sides of the Brexit argument.