A policeman involved in the freeing of all of the hostages at the Super U supermarket in the town of Trebes was injured during the operation to kill the gunman, the source added, asking not to be named.

Interior Minister Gerard Collomb later said the injured policeman who was shot by the assailant had swapped himself for a hostage in the siege, hailing his “act of heroism”.

Mr Collomb named the gunman as 26-year-old Redouane Lakdim and described him as a small-time drug dealer who was not considered a terror threat.

“He was known by the police for petty crimes, we had monitored him and did not think he had been radicalised,” Mr Collomb said after arriving at the scene of the hostage-taking.

“He was already under surveillance when he suddenly decided to act,” he said.

Security sources had said the gunman was believed to be a Moroccan who was on a watch list of suspected Islamic extremists, but Mr Collomb did not confirm his nationality.

Witnesses said Lakdim shouted “Allahu Akbar” (God is greatest) at the supermarket, where he took several people hostage after opening fire on passengers in a car and a police officer in nearby Carcassonne.

He eventually let the hostages go after a policeman offered to take their place.  Security forces stormed the store after he shot the officer who was seriously wounded, Mr Collomb said.

The hostage-taker had asked for the release of Salah Abdeslam, one of the terrorists involved in the Paris attacks in November 2015, BFM TV said, citing an anonymous source.

Abdeslam is the prime surviving suspect in the attacks in Paris that killed 130 people.

The Islamic State in Iraq and Syria (ISIS) militant group has claimed responsibility for the Trebes attack.

More than 240 people have been killed in France in attacks since 2015 by assailants who pledged allegiance to, or were inspired by, ISIS.

The shootings come with France still on high alert after a string of Islamist attacks since 2015, starting in January that year with the assault on satirical magazine Charlie Hebdo that left 12 people dead. 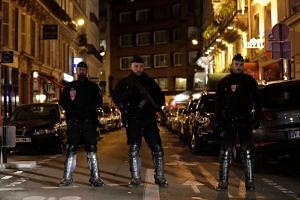 In July 2016, in another attack claimed by ISIS, a man drove a truck through revellers celebrating Bastille Day, killing 84 people.

A state of emergency put in place just after the Paris attacks was finally lifted in October last year, but soldiers continue to patrol major tourist sites and transport hubs under an anti-terror mission.