WARSAW (Bloomberg) - Poland's government refused to apologise on Monday (Feb 19) for Prime Minister Mateusz Morawiecki's comments about "Jewish perpetrators" during World War II, escalating a row that's upended the country's relations with Israel and is alarming the US.

When confronted during a conference in Munich on Saturday (Feb 17) over Poland's new law that criminalises suggestions that the Polish nation bore any responsibility for the Holocaust, Morawiecki listed Jews among nations that along with Germans were "perpetrators" of Nazi-era crimes. His list included Ukrainians, Russians and Poles.

Israeli Prime Minister Benjamin Netanyahu said the comments were "outrageous," while Yair Lapid, an opposition politician, called on Israel to recall its ambassador from Poland.

Morawiecki's intention was to list nations that collaborated with the Germans, Foreign Minister Jacek Czaputowicz said on Monday, adding that use of the word "perpetrators" was a "linguistic mistake" for which there is no need to apologise.

Last month, Poland's ruling party passed the Holocaust law despite US warnings that it censors free speech and may weaken the east European nation's "strategic interests and relations".

The prime minister's "remarks were not aimed at denying the Holocaust or hiding its real perpetrators," Czaputowicz told private broadcaster Polsat News on Monday. "One has to be ill-willed to look for a willingness to put an equal sign between the suffering of Jews and other nations under Nazi occupation."

The Union of Jewish Communities in Poland said in a statement that while there were "Jewish criminals and Jewish police in the ghettos" set up by the Nazis during the war, Morawiecki's comments signaled a "moral blindness and historical ignorance" by putting those "who acted under the greatest duress in one sentence with Polish perpetrators and Ukrainian and German criminals". 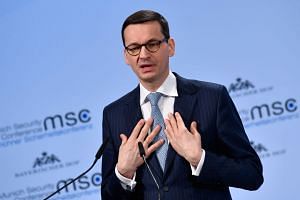 Relations between Poland and Israel have deteriorated over legislation that makes suggestion of Polish complicity in the Shoah a crime punishable by up to three years in jail - a move seen by critics as an attempt to whitewash history.

It also marks a U-turn in reconciliation efforts, which included an apology by then-President Aleksander Kwasniewski in 2001 for anti-Semitic incidents like a wartime massacre of Jews by their Polish neighbors in the village of Jedwabne in 1941.

"My heart has been broken for the last two weeks," Michael Schudrich, Poland's chief rabbi, told private Radio Zet on Monday. "This is the worst moment in Polish-Jewish relations in the last thirty years."