PARIS - Thousands of youth delegates are at the Paris climate talks keen to shape an agreement that will have a major impact on their future.

Youth around the globe have been active in pushing for the world to become greener by shifting away from polluting fossil fuels. They also want a world with a fairer share of resources and economies that aren’t driven by policies that strip the globe of its natural wealth.

They see the talks as a great opportunity for their views to be heard and directly influence negotiators and world leaders.

On Thursday, The Straits Times met five young people on the sidelines of the Nov 30 to Dec 11 talks and all spoke passionately about the importance of the negotiations that are tasked with sealing a global climate pact.

Each in their own way is actively involved in influencing the outcome. 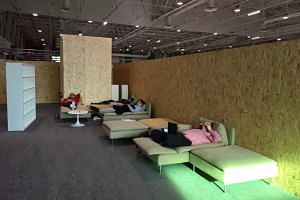 They expressed optimism that the Paris talks will finally yield an agreement for all nations to fight climate change, after more than two decades of negotiations.

Ms Vo Thi Xuan Quyen, 23, from southern Vietnam, worried about the impact of rising sea levels on the Mekong Delta, a major rice-growing region. A 1m rise would inundate a large portion of the delta, affecting millions of people.

At the talks, she is calling for more spending on vulnerable people in her country, such as youth, women and the disabled.

Ms Quyen, who works for local NGO Live & Learn, says most of the climate finance for cutting emissions and adapting to climate change impacts goes to infrastructure.

“I come here with one message, that climate finance is a serious problem in Vietnam,” she said, adding she came to talk with the Vietnamese government and international leaders on the issue.

Singaporeans Ms Boo Yi Lin, 22, and Mr Lalit Kumar Ganesh, 26, are active in sharing knowledge about climate change and the UN climate talks process with fellow Singaporeans back home through outreach events, blogs and other programmes.

Both are part of a 12-month fellowship run by ECO Singapore, an environmental NGO, which takes a small group of youths to UN climate talks each year. All the fellows have to pay their own costs to attend the talks.

The NGO, founded by Singaporean Wilson Ang, receives funding and other support from Young NTUC, the National Youth Council and City Developments Limited.

“The impacts of climate change are not directly felt in Singapore as much as what you like to think in other countries. Singaporeans need to realise that their daily activities, their habits, their consumption patterns impacts everyone. This is a global problem,” said Mr Lalit Kumar, who graduated from NTU as an environmental engineer and now works for Singapore-based green energy firm Sindicatum Sustainable Resources.

Ms Boo is a business undergraduate and the director of finance for the Singapore Institute of Management’s International Affairs Society, and said she has been involved in environmental issues in Singapore, as well as being a volunteer at wildlife conservation group WWF.

For Ms Boo, the UN climate talks represent a great opportunity to learn about different institutions and practices that were unfamiliar to most Singaporeans.

Explaining the goings on in the talks and negotiation process and why they are important remains a major challenge.
Australian Hamish McKenzie, 24, said he was driven to understand the real threats to humanity from climate change and how best to communicate these.

At the talks, he works as a reporter for The Verb, an environmental news wire, and has created a tool called the Negotiation Compass that helps readers keep track of the talks.

McKenzie, from Melbourne, is doing his masters degree at Oxford on environmental change and management.

“I originally studied anthropology but it became clear to me from my studies that some of the biggest shifts that people are going to face in the future is the environmental crisis that is upon us and is set to get worse,” he said.

“I had to have an understanding of the environmental changes that were happening to us,” he added.

He felt he could have the most impact by trying to get across all the complex policy issues that the talks are dealing with and distil them into a couple of key messages that are digestible to the general public.

Indonesian Maria Imanuella Areta Oenoto, 20, is part of the Indonesia country delegation and is helping with the negotiations. She hopes a Paris climate agreement will lead to positive change in her country’s environmental record and was upbeat on the outcome.

All five shared similar optimism but some also worried the agreement won’t be strong enough and needed to be strengthened quickly over the coming few years.

“We are running out of time but we will hit an agreement, which will be a compromise,” Mr Lalit Kumar said.

Asked if he was confident about a future in which he could raise children, he said: “To be confident enough to raise our kids? No from my side, based on where things are going as of now. But I think Paris will be a good foundation,” he said of the agreement.

Mr McKenzie was hopeful that the world will be able to tackle climate change.

“What is on the table (in Paris) is establishing a new regime that will last and get us to where we need to be over the next 35 years.

“It is just inconceivable to me that some of the smartest people in the world, the world leaders, would steer our planet into a suicidal explosion of self-destruction when they know exactly what they are doing,” he added.