PARIS (REUTERS) – The Louvre and Orsay museums in Paris moved scores of artworks and precious artefacts to safety and soldiers evacuated residents trapped in some of the capital’s outlying suburbs as the rain-swollen river Seine hit its highest level in 30 years.

The worst affected areas lay just to the south of the capital.

“It’s a bit frightening, everything that’s happening,” said one woman from Marseille who identified herself only as Odile. “Not long ago they ran a flood simulation, how to evacuate museums, residents. And now it’s happening for real.”

The heavy flooding of the past week could cost French insurance companies some 600 million euros (S$925 million) or more, industry association AFA said. 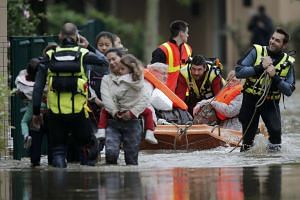 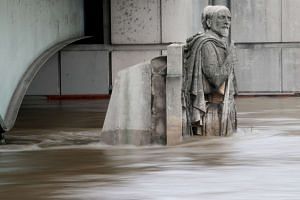 Both the Louvre and Orsay museums overlooking the Seine were closed to the public on Friday.

In the Louvre, workers stacked dozens of boxes marked fragile and containing valuable statues, vases and artworks. Crates could be seen stacked in corridors, overlooked by classical marble statues.

“For the museums, even if fortunately there isn’t any flooding of storerooms as of today, there is an automatic process above 5.5m to move works in the deepest storerooms higher,” Bruno Julliard, Paris’ deputy mayor, told France Inter radio.

The Louvre and the Musee d’Orsay are both home to world-renowned art collections, the former including the celebrated Mona Lisa painting and Venus de Milo statue.

Even as the Seine crested higher, it remained well below the record high of 8.6m reached in 1910, when thousands of Parisians had to flee inundated low-lying areas of the city.

Officials said the river could peak at 6.5m later on Friday, and warned flood waters could take several weeks to recede after the wettest May in France for 100 years.

“It’s amazing. I have been here many times and it’s the first time I have seen the river so high,” said Mr Brian Alan, an American tourist from Atlanta, Georgia, who was watching the scene from the Alexander III bridge.

Rescuers in the Parisian suburb of Longjumeau were paddling up streets in lifeboats, while in the town of Montargis, only the tops of cars could be seen peeking above the surface.

About 200 people had to spend the night in a gymnasium in Nemours south of Paris and Prime Minister Manuel Valls, visiting the flooded town’s a crisis control centre, said at least 2,000 more people needed to be evacuated.

“The situation remains tense and difficult,” he said.

French President Francois Hollande said a state of “natural catastrophe” would be declared when the Cabinet meets next Wednesday.

“What’s going to be even more painful for the families who have lost their homes, the heads of companies who have lost their businesses, employees who will be unable to go to work, is that the drop in the water level will be very slow,” Royal said. The retreating waters could reveal further victims, she added.

In Evry-Gregy-sur-Yerre, a man on horseback drowned on Thursday, becoming the first fatality from the flooding caused by days of unusually torrential rain.

The 74-year-old’s body was recovered from the water by firefighters. The horse made its own way back to safety, police said.

The rains have hit the French Open tennis tournament, washing out play earlier in the week and leaving players facing a heavy match schedule ahead of the finals.

There were also chaotic scenes in the German town of Simbach am Inn, where the force of the water swept away the entire stock of a sawmill, leaving huge stacks of splintered wood blocking roads.

On one street, a car could be seen parked vertically against the wall of a house, pushed there by the floodwaters. Many other vehicles lay flipped over on roads blanketed by mud.

Five people have been killed in the Simbach area, including three women from the same family – a mother, grandmother and daughter – who had been trapped in their house.

Two other elderly people were also found dead in their homes.

“The (rise in) water was so quick that practically no residents had the time to run away,” police spokesman Armin Angloher said.

The deaths bring the toll from the floods in Germany to nine, including four killed earlier this week in the southern region of Baden-Wuerttemberg.

Three others are missing, a police spokesman in Bavaria state said.

German Chancellor Angela Merkel said her thoughts were with the families “who have been plunged into this devastation”.

Schools and roads have also been flooded in Austria in recent days, though the waters have now receded.

Heavy rains have also been lashing the Netherlands, with more bad weather expected. Television images showed streets in the southern towns of Boxmeer and Deurne already ankle-deep in water.