PARIS (WIRES) - Gunmen and bombers attacked restaurants, a concert hall and a sports stadium at locations across Paris on Friday (Nov 13), killing more than 120 people in a deadly rampage that a shaken President Francois Hollande called an unprecedented terrorist attack.

Some 200 people were reportedly injured, including 99 in critical condition , said a source at the prosecutor's office on Saturday.

Some 40 more people were killed in five other attacks in the Paris region, the city hall official said, including an apparent double suicide bombing outside the national stadium, where Hollande and the German foreign minister were watching a friendly soccer international.

The coordinated assault came as France, a founder member of the United States-led coalition waging air strikes against Islamic State fighters in Syria and Iraq, was on high alert for terrorist attacks ahead of a global climate conference due to open later this month.

The current death toll stands at 128. A spokesman for Paris Public Prosecutor Francois Molins said eight assailants had also died, seven of whom had blown themselves up with explosive belts at various locations, while one had been shot dead by police.

It is the bloodiest attack seen in Europe since the 2004 Madrid train bombings, which had claimed the lives of 191 people and injured a further 1,800.

"The terrorists, the murderers raked several cafe terraces with machine-gun fire before entering (the concert hall). There were many victims in terrible, atrocious conditions in several places," police prefect Michel Cadot told reporters.

After being whisked from the soccer stadium near the blasts, Hollande declared a nationwide state of emergency - the first since the end of World War Two - and announced the closure of France's borders to stop perpetrators escaping.

The Paris Metro railway was closed and schools, universities and municipal buildings were ordered to stay shut on Saturday. However some rail and air services are expected to run.

"This is a horror," the visibly shaken president said in a midnight television address to the nation before chairing an emergency cabinet meeting.

He later went to the scene of the bloodiest attack, the Bataclan music hall, and vowed that the government would wage a "merciless" fight against terrorism.

All emergency services were mobilised, police leave was cancelled, 1,500 army reinforcements were drafted into the Paris region and hospitals recalled staff to cope with the casualties.

It was unclear whether any gunmen were still on the loose.

Radio stations broadcast warnings to Parisians to stay home and leave the streets and urged residents to give shelter to anyone caught out in the street.

The deadliest attack was on the Bataclan, a popular concert venue where the Californian rock group Eagles of Death Metal was performing. The concert hall is just a few hundred metres from the former offices of the satirical weekly Charlie Hebdo, target of a deadly attack by Islamist gunmen in January.

Some witnesses in the hall said they heard the gunmen shout Islamic chants and slogans condemning France's role in Syria.

"We know where these attacks come from," Hollande said, without naming any individual group. "There are indeed good reasons to be afraid." France has been on high alert ever since the attacks on the Charlie Hebdo newspaper and a kosher supermarket in Paris in January killed 18 people.

Those attacks briefly united France in defence of freedom of speech, with a mass demonstration of more than a million people. But that unity has since broken down, with far-right populist Marine Le Pen gaining on both mainstream parties by blaming immigration and Islam for France's security problems.

It was not clear what political impact the latest attacks would have less than a month before regional elections in which Le Pen's National Front is set to make further advances.

The governing Socialist Party and the National Front suspended their election campaigns. Ex-president Nicolas Sarkozy, now leader of the main conservative opposition party, said, "The terrorists have declared war on France" and backed the state of emergency and border closure.

Hollande cancelled plans to travel to Turkey at the weekend for a G20 summit. He called an emergency meeting of his national security council for 9 a.m. (0800 GMT) on Saturday.

Footage of a shoot-out in #Paris. pic.twitter.com/zcZTKcpdMP

Omg what's happening in #Paris.. So sad! My thoughts are with all families who suffered. https://t.co/3d28dHFRhz

There was no immediate verifiable claim of responsibility but supporters of the Islamic State militant group, which controls swathes of Iraq and Syria, said in Twitter messages that the group carried them out.

Earlier on Friday, the United States and Britain said they had launched an attack in the Syrian town of Rakka on a British Islamic State militant known as “Jihadi John” but it was not certain whether he had been killed.

"The State of the caliphate hit the house of the cross," one tweet said.

Two explosions were heard near the Stade de France in the northern suburb of Saint-Denis, where the France-Germany friendly soccer match was being played. The blasts were audible on television during the live broadcast.

A witness said one of the detonations blew people into the air outside a McDonald's restaurant opposite the stadium.

The match continued until the end, but panic broke out in the crowd as rumours of the attack spread, and spectators were held in the stadium and assembled spontaneously on the pitch.

Police helicopters circled the stadium as Hollande was rushed back to the interior ministry to deal with the situation.

In central Paris, shooting erupted in mid-evening outside a Cambodian restaurant in the capital’s 10th district and the Bataclan music hall, where bystanders were evacuated as elite police commandos took up position. 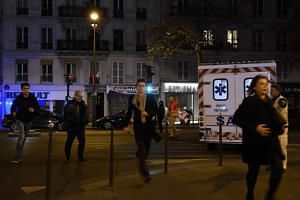 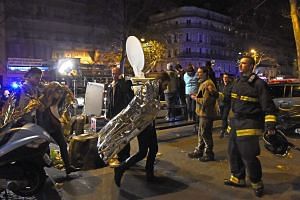 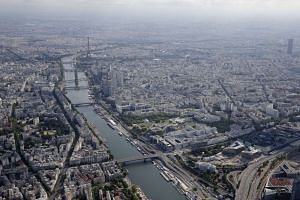 Several witnesses told television stations that up to 60 hostages were being held inside the popular concert venue.

“There are lots of people here. I don’t know what’s happening," a sobbing witness who gave her name only as Anna told BFM TV outside the Bataclan hall. "It’s horrible. There’s a body over there. It’s horrible."

“We heard gunfire, 30 seconds of fire, it was interminable, we thought it was fireworks,” Mr Pierre Montfort, who lives near Rue Bichat, where one of the attacks took place, told AFP.

“My sister is in the Bataclan,” said Ms Camille, 25. “I phoned her. She said they opened fire. And then she hung up.”

An AFP reporter outside the Bataclan said there were armed police and some 20 police wagons with their lights flashing around the scene.

Julien Pearce, a journalist from Europe 1 radio, was inside the concert hall when the shooting began. In an eyewitness report posted on the station's website, Pearce said several very young individuals, who were not wearing masks, entered the hall during the concert, armed with Kalashnikov assault rifles and started "blindly shooting at the crowd".

"There were bodies everywhere," he said.

The gunmen shot their victims in the back, finishing some off at point-blank range before reloading their guns and firing again, Pearce said, after escaping into the street by a stage door, carrying a wounded girl on his shoulder.

Toon, a 22 year-old messenger who lives near the Bataclan, was going into the concert hall with two friends at around 10.30 p.m. (2130 GMT) when he saw three young men dressed in black and armed with machine guns. He stayed outside.

One of the gunmen began firing into the crowd. "People were falling like dominoes," he told Reuters. He said he saw people shot in the leg, shoulder and back, with several lying on the floor, apparently dead.

Elsewhere, police cordoned off a wide area around the Petit Cambodge restaurant where witnesses said gunmen armed with Kalashnikov assault rifles had fired at diners through the plate-glass windows, causing multiple casualties.

“Everyone was on the floor, no one moved,” said one witness from the Petit Cambodge restaurant.  “A girl was carried by a young man in his arms. She appeared to be dead.”

“I was on my way to my sister’s when I heard shots being fired. Then I saw three people dead on the ground, I know they were dead because they were being wrapped up in plastic bags,” student Fabien Baron told Reuters.

There were also reports of shootings in Rue de Charonne in the 11th district and at the central Les Halles shoping centre.

“We stand prepared and ready to provide whatever assistance that the government and the people of France need,” he said, and pledged to “bring these terrorists to justice and go after any terrorist networks” involved.

“Those who think that they can terrorise the people of France or the values that they stand for are wrong,” he said. 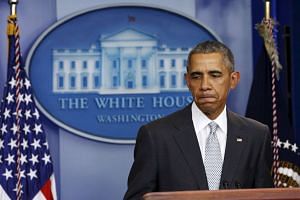 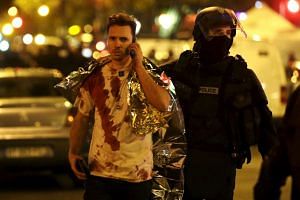 The US has no plans to step up security for transportation infrastructure or public events in the wake of the attacks, said an official. He added that US agencies were monitoring the events and that the American embassy in Paris was seeking to account for US citizens there.

British Prime Minister David Cameron, meanwhile, tweeted his "shock" and said "our thoughts and prayers are with the French people. We will do whatever we can to help."

“He demands the immediate release of the numerous individuals reportedly being held hostage in the Bataclan theatre,” a spokesman for Mr Ban said in a statement.

German Chancellor Angela Merkel said she was "profoundly shocked" by the attacks, while Russia branded them "inhuman".

In Singapore, Prime Minister Lee Hsien Loong also condemned the shootings calling it "an attack on our shared humanity".

"I am just about to leave for Antalya in Turkey for the G20 meeting, where one agenda item is terrorism. This latest incident renders our discussions more relevant and urgent than ever," he posted on Facebook.

"We have stepped up security measures, border checks and vigilance. Together, everyone plays a part to keep Singapore safe and secure. We encourage everyone to remain vigilant and report any suspicious activities or persons to the authorities," Mr Shanmugam, who is also Law Minister, posted on Facebook.

Defence Minister Ng Eng Hen added that vigilance has also been stepped up at camps in Singapore, especially naval and air bases.