PARIS (AFP) - The Eiffel Tower reopened on Monday (Nov 16), three days after closing because of the wave of terror attacks on Paris.

The iconic tower - like monuments the world over following the deadly extremist attacks on Paris - was lit up in the French national colours blue, red and white at sundown on Monday.

Normally visited by between 15,000 and 20,000 people a day, the tower was closed until further notice after Friday's attacks. 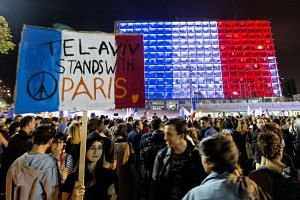 In Pictures: World lights up in solidarity with France

But it has now reopened, and will glow with the patriotic colours for the next three evenings, its operator said.

The illumination included the defiant Latin slogan of Paris, "Fluctuat nec mergitur" meaning "It is buffeted by the waves, yet remains afloat."

The illumination resumed on Sunday, but without the light show, during which the tower erupts in bursts of lights, appearing to dance and float in the night.

The Great Pyramid in Egypt, Sydney Opera House, One World Trade Centre in New York have been among structures around the world to light up in blue, white and red in solidarity with France.