LONDON (AFP) - A judge has ruled that terminally ill British toddler Alfie Evans will not be allowed to go to Rome for further treatment but can go home, following a court appeal by his family on Tuesday (April 24).

Judge Anthony Hayden told a High Court hearing in Manchester, north-west England, that the long-running case had now reached its "final chapter" as he turned down a bid to take the 23-month-old to Italy to continue medical treatment.

Pope Francis had issued an appeal on Twitter on Monday that the parents' "desire to seek new forms of treatment may be granted" for the boy, who suffers from a rare degenerative neurological condition.

Italy has previously said it was granting citizenship to the toddler.

But Hayden rejected the move and claims by his parents that Evans was "significantly better" since doctors first withdrew life support on Monday.

The judge said the best they could hope for was to "explore" the options of removing the boy from intensive care either to a ward, a hospice or his home.

Hayden had on Monday rejected another appeal by the parents, Tom Evans and Kate James, for a delay in order to give them time to present a new challenge. 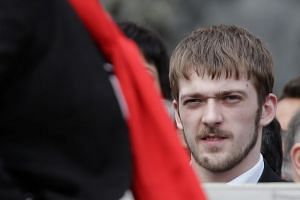 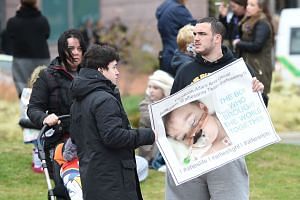 The boy's father told reporters on Tuesday that the doctors had withdrawn life support on Monday but his son was still alive.

The Bambino Gesu (Baby Jesus) paediatric hospital in Rome, which is administered by the Vatican, has said a specially-equipped plane from the Italian defence ministry is on standby to fly to Britain to pick up the boy if he is released.

Evans met Pope Francis in the Vatican last Wednesday after several statements of support made by the Pope.

"Moved by the prayers and immense solidarity shown little Alfie Evans, I renew my appeal that the suffering of his parents may be heard and that their desire to seek new forms of treatment may be granted," the Pope said on Twitter.

At an audience last week, he told attendees in reference to the case: "I want to reiterate and strongly confirm that the only master of life, from the beginning to its natural end, is God, and our duty is to do everything to protect life."

Moved by the prayers and immense solidarity shown little Alfie Evans, I renew my appeal that the suffering of his parents may be heard and that their desire to seek new forms of treatment may be granted.

Hundreds of people have protested outside the Liverpool hospital in support of the father's plea for the boy to be discharged.

On Monday, a large group of protesters attempted to storm the entrance before being blocked by police.