LONDON (NYTIMES) - Three Oxfam employees who were the subject of a 2011 inquiry into sexual misconduct in Haiti physically threatened a witness after a manager leaked an investigation report to another member of staff, the charity said Monday (Feb 19).

The threats and intimidation were among several accusations of misconduct made public for the first time with Oxfam's release of its 2011 report into the conduct of its Haiti staff, including the hiring of prostitutes.

The report states that two of the three people who threatened a co-worker were also accused of "sexual exploitation and abuse of employees," in addition to hiring prostitutes. It does not say whether Oxfam concluded that the claims of mistreatment of colleagues were true, but it says that both of the accused were among four employees "dismissed for gross misconduct", and that one of them was guilty of "failure to protect staff".

Oxfam, one of the largest British charities, had previously acknowledged that it had fired four people working on earthquake recovery in Haiti, and that three others resigned during or after the investigation, following allegations that they had hired prostitutes on the group's premises outside Port-au-Prince.

Oxfam has also admitted that after forcing out those seven, it did not notify authorities in Haiti, where prostitution is illegal, and that it later hired one of the men as a consultant in Ethiopia.

The revelations have led to investigations by the British government, a halt to government funding of the charity, talk of prosecution by Haitian authorities, the resignation of a top Oxfam executive, and disclosure of claims of sexual misconduct and exploitation by aid workers from multiple groups in many countries.

The president of Haiti, Jovenel Moïse, told Reuters on Friday that Oxfam was just "the visible part of the iceberg", and that a much broader investigation into aid organisations was needed. 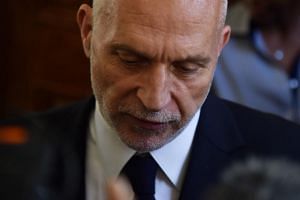 Penny Mordaunt, the Cabinet minister who leads Britain's Department for International Development, met last week with Oxfam leaders and threatened to cut off the tens of millions of dollars the group receives annually from the government. On Friday, she said, "Oxfam has agreed to withdraw from bidding for any new UK government funding until DFID is satisfied that they can meet the high standards we expect of our partners."

The chief executive of Oxfam's British arm, Mark I. Goldring, has apologised repeatedly for the Haiti episode, but he told The Guardian that "the scale and the intensity of the attacks feels out of proportion to the level of culpability". The scandal erupted as some Conservative lawmakers were calling for a drastic reduction in government spending on foreign aid.

In 2011, Oxfam announced that it had found misconduct by some staff members in Haiti, but did not reveal any details, and the statement drew little attention. This month, The Times of London first reported that the misconduct involved prostitutes, and that Van Hauwermeiren was among those implicated.

The report Oxfam released Monday shows that others were disciplined, in addition to the seven who left the group in 2011, including one person who admitted to leaking a report on the investigation, leading to threats, and another person who was accused of "violence against contractors" and unspecified mistreatment of other aid workers.

Five of the seven who were forced out were accused by co-workers and contractors of "bullying and harassment", the report shows.

While the investigation was underway, the report said, a manager leaked an investigation report to another, unconnected member of staff. "This resulted in three of the suspects," it said, "physically threatening and intimidating one of the witnesses who had been referred to in the report", resulting in additional charges against them.

Roland Van Hauwermeiren, Oxfam's country director in Haiti at the time, said last week that months before the formal investigation, he had already forced two other workers in Haiti to resign because they had hired prostitutes.

The organisation redacted the names of all of staff members involved, except for Van Hauwermeiren, who resigned. But the group said it had given an unredacted version of the report to Haitian authorities.

Van Hauwermeiren was not among those accused of threatening, bullying or abusing others, but Oxfam said that during its investigation, he admitted to hiring prostitutes. He denied this in a statement he released last week, saying that he had an affair with a Haitian woman whose family received aid from the group, but that no money had changed hands.

"I am not perfect, I'm no angel, a man of flesh and blood, and I made mistakes (not easy to admit), and I am deeply ashamed," he wrote. "I feel like a fellow culprit, but not in the way some media have portrayed it." He also denied reports of sexual misconduct in Chad, where he worked for Oxfam before going to Haiti.

Van Hauwermeiren said that in late 2010, he was "made aware of sexually inappropriate behavior of a colleague towards a female colleague," and officials separated the two.

In 2011, Oxfam's internal policies prohibited trading aid for sex, and sex with people under 18, but did not specifically ban hiring prostitutes. The group has said it changed its policy after the Haiti episode.