BERLIN - The bus stops in front of the city hall in Frankfurt, the final destination after an eight-day tour through Germany. Six tourists from Singapore alight and once on the open square, most of them remove their masks. In Germany, masks are currently not compulsory in the open air, and there is no restriction on the size of a group, as long as social distancing - of 1.5m - is maintained.

"In Germany, there are fewer people crowding the streets and squares than in Singapore," she said.

She arrived in Germany just over a week ago with the first tour group from Singapore via the Vaccinated Travel Lane (VTL) scheme, "experiencing history" by visiting castles, palaces and mediaeval towns along the "Romantic Road" - a picturesque 350km route through the forests and mountains of the southern German provinces of Bavaria and Baden-Wurttemberg.

In a store for the famous "cuckoo clocks" in the Black Forest, her group was the first from Asia since the outbreak of the Covid-19 pandemic.

Ms Lam has travelled to Europe every year since 2016 but could not do so in 2020. After just over a week in Germany, she said: "The step towards normality feels reassuring."

On the last day of her trip, she is due to take a polymerase chain reaction (PCR) test, one of four she will have to undergo as part of the VTL. The remaining three tests will be conducted in Singapore.

Since Sept 8, fully vaccinated passengers have been able to travel between Singapore and Germany on designated VTL flights operated by Singapore Airlines (SIA) and German carrier Lufthansa. They must have been in Germany or Singapore for the previous 21 days prior to departure.

Travellers arriving from Germany on designated VTL flights in Singapore can undergo a testing regime in lieu of serving a stay-home notice. Vaccinated travellers from Singapore do not have to serve quarantine in Germany.

SIA offers a VTL flight every day; Lufthansa on Thursdays and Saturdays. More than 20 of the VTL flights have since ferried over 1,000 passengers between Singapore and Germany.

Lufthansa has seen demand for the route quadrupling since the introduction of the VTL to Singapore. Demand had slumped due to the pandemic and lockdowns.

"Worldwide quarantine restrictions were the main reason why people did not fly. Once these restrictions are gone, people are travelling again," said Ms Sabrina Winter, head of Lufthansa Group Airlines for South-East Asia and the Pacific.

"Singapore is the first country in the region to open a quarantine-free travel corridor for fully vaccinated people between Europe and Asia. This is an important step that might pave the way for other countries as well," she added.

Rise in inquiries, bookings from Germany under vaccinated travel to S'pore

Those in business, such as e-book publisher Sebastian Hallenberger, 37, have especially welcomed the VTL. He was among those who would not have made his flight without it. A week ago, he returned from Singapore on a business trip.

"Two weeks of quarantine would definitely not have worked. I have to take care of my family and company," he said.

Prior to taking off for Singapore, Mr Hallenberger was worried about the registration process via the TraceTogether app and the length of time it would take to receive the necessary negative test result upon arrival. His fears were misplaced.

"I landed in Singapore at 5pm and was at the hotel pool the same evening. It was all super organised," he said.

So after 1½ years and countless video conferences, he was finally able to hold face-to-face meetings again with publishers in Singapore to try to build up his e-book business in Asia. "The trip finally allowed me to continue building trust," he said.

Travel to and from S'pore without quarantine: How the new Vaccinated Travel Lane works

"Many German companies manage their business for the whole Asean region from Singapore," said the head of the Singaporean-German Chamber of Industry and Commerce, Dr Tim Philippi.

The chamber has 600 members from 360 companies.

"The VTL was very well-received by our members. It allowed many to finally visit family in Germany without wasting too much time," he said.

In turn, more than 2,000 Singaporeans who live in Germany have also benefited. Many belong to a Facebook group "Singaporeans in Germany", using it to exchange information and tips about the newly established VTL.

Coordinator Laura Ng, 32, knows that some are still holding off on travelling home.

"They're afraid that as infection numbers are on the rise again, the rules will change and already booked VTL flights could be cancelled," she said, adding that the four PCR tests are also costly.

Ms Ng, who has not visited her family in two years, hopes the situation will continue to stabilise in the future.

But for now, many are glad for the VTL, hoping instead that it will expand.

"I've been guiding groups around Europe for 27 years, and for a few months, I've barely been able to work," said Mr Gary Teo, 49, the Singaporean tour group's guide in Frankfurt.

If VTLs are established in other European cities besides Frankfurt and Munich, he will be able to lead groups there as well. "It feels like coming home," he said.

5 under-the-radar experiences that tell the story of Germany

S'pore's Covid-19 travel lane: Where next after Germany and Brunei? 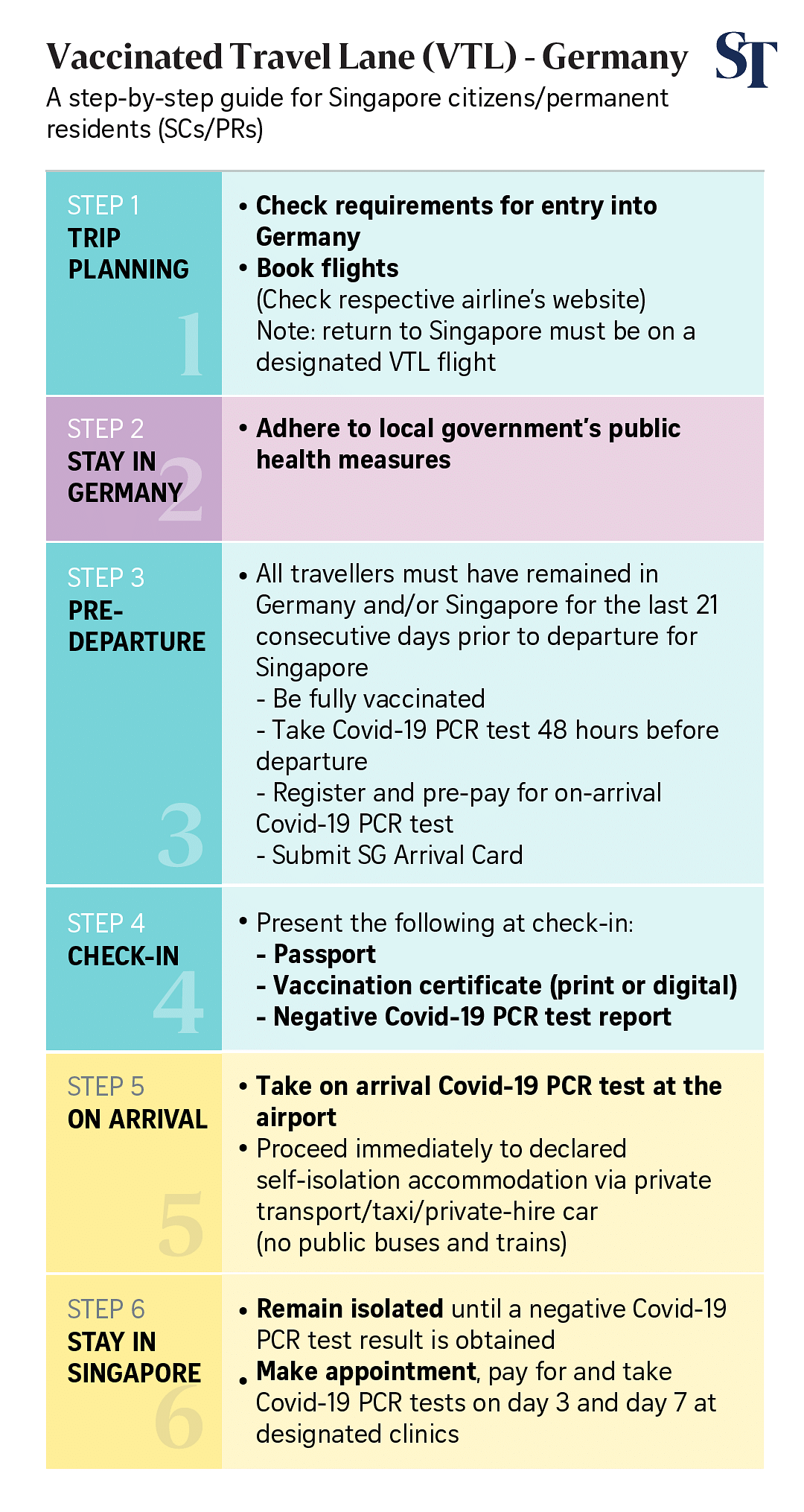