VIENNA (BLOOMBERG) – OPEC and its allies gave the final sign-off to an oil-production increase after a third successive day of meetings in Vienna.

Major producers outside the Organisation of Petroleum Exporting Countries – including Russia, Mexico and Kazakhstan – met ministers from the cartel on Saturday (June 23) and endorsed a nominal output increase of 1 million barrels a day, said Ecuador’s Minister of Hydrocarbons Carlos Perez. In real terms, that would add about 700,000 barrels a day of crude to the market, starting next month.

Friday’s OPEC agreement, reached after a last-minute compromise between Saudi Arabia and Iran, was a fudge in the time-honoured tradition of the group, committing to boost output without saying which countries would increase or by how much.

It gives the Saudis and Russians – holders of the largest spare capacity – the flexibility to respond to disruptions and moderate prices at a time when U.S. sanctions on Iran and Venezuela threaten to throw the oil market into turmoil.

The terms of the deal were rather convoluted. The group’s agreed production increase of 1 million barrels a day was described as “nominal” by Saudi Energy Minister Khalid Al-Falih. In reality, the accord will add a smaller amount of oil to the market because a number of countries are unable to raise their output. 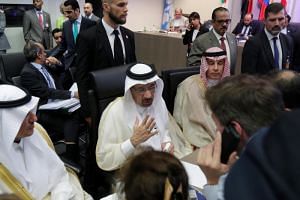 On Friday, every minister seemed to have his own interpretation of what the hike meant for the market.

The official communique from the meeting didn’t mention specifics, instead pledging that the group would focus on restoring its output cuts to the level originally agreed in 2016.

Some traders were far from confident that such an agreement will meet the multiple challenges OPEC faces.

The situation in Venezuela is volatile, with a wide range of predictions of how much further its production could slump as its industry unravels.

There are also growing signs that the renewed US sanctions on Iran could have a larger impact than the 1 million-barrel-a-day reduction in exports seen in 2012.

Iran doesn’t believe its customers will get waivers from the US government that would allow them to continue crude purchases, Oil Minister Bijan Namdar Zanganeh said in a Bloomberg television interview on Friday.

American officials are said to have asked Japan to completely halt oil imports from Iran, going beyond the cuts demanded during the Obama-era sanctions.

US President Donald Trump, whose tweets played a part in prompting Saudi Arabia to push for a production increase, indicated on Friday that he’ll be watching the progress of their new agreement closely.