OFF ANVERS ISLAND, Antarctica (REUTERS) - The number of chinstrap penguins in some colonies in Western Antarctica has fallen by as much as 77 per cent since they were last surveyed in the 1970s, say scientists studying the impact of climate change on the remote region.

The chinstrap penguin, named after the narrow black band under its head, inhabits the islands and shores of the Southern Pacific and Antarctic Oceans and feeds on krill.

"The declines that we've seen are definitely dramatic," said Steve Forrest, a conservation biologist who joined a team of scientists from the two US universities of Stony Brook and Northeastern on an Antarctic expedition that has just ended.

"Something is happening to the fundamental building blocks of the food chain here. We've got less food abundance that's driving these populations down lower and lower over time and the question is, is that going to continue?"

The scientists, travelling on two Greenpeace ships, the Esperanza and the Arctic Sunrise, conducted their expedition to Western Antarctica from Jan 5 to Feb 8, and used manual and drone surveying techniques to assess the scale of the damage.

The number of chinstraps at one important habitat in the region, Elephant Island, has plummeted by around 60% since the last survey in 1971, to fewer than 53,000 breeding pairs today, the expedition found.

"While several factors may have a role to play, all the evidence we have points to climate change as being responsible for the changes we are seeing," said Heather Lynch, associate professor of ecology and evolution at Stony Brook University.

The World Meteorological Organisation said last week that a research base in Antarctica had recorded the hottest temperature ever for the continent - 18.3 degrees Celsius (64.94 degrees Fahrenheit) - as global warming causes an increase in melting of the ice sheets around the south pole.

A pungent smell of penguin excrement informs the scientists that they are nearing a colony even before they can hear the birds' loud, harsh call.

The birds have not learned to fear humans, so they mostly ignore their visitors. 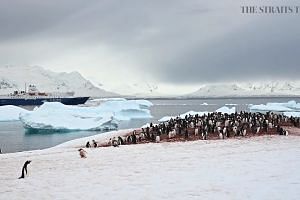 To the end of the earth: Antarctica's raw, icy beauty and amazing wildlife

Warm temperatures at a Florida-sized glacier in Antarctica alarm scientists

Greenpeace is calling on the United Nations to commit to protect 30 per cent of the world's oceans by 2030, a target called for by scientists and a growing number of governments as the minimum needed to halt the damage being done by harmful human activity.

The UN will meet from March 23 to April 3 to try to agree a global ocean treaty, which could then take years to ratify.

"I think we stand to lose much of what we love... like the penguins from Elephant Island, but I think in the end it's what kind of world do we want to live in?" Frida Bengtsson, Greenpeace Oceans campaigner, told Reuters off Anvers Island.

"Our oceans are incredibly important to regulate our global climate."

For 36-year-old Usnia Granger, a Greenpeace activist who worked as a deck hand on the expedition, visiting Antarctica was"a dream come true", though it involved lots of hard work cleaning, painting, mooring and helping to clear away some of the garbage that washes up in Antarctica.

"I think climate global chaos is wreaking havoc everywhere and I don't imagine Antarctica will be any different from that," she told Reuters.

"It feels like a privilege to see it now before it starts to change anymore."