LONDON (REUTERS) - It would not be sensible to aim only to leave the European Union without a deal, but it would not be responsible to take no-deal off the table, Mr Boris Johnson, the bookmakers' favourite to succeed Mrs Theresa May as British prime minister, said on Sunday (May 26).

Last Friday, former foreign minister Johnson said Britain should leave the bloc with or without a deal on Oct 31.

"No one sensible would aim exclusively for a no-deal outcome. No one responsible would take no-deal off the table," he wrote in his weekly column for the Daily Telegraph newspaper.

"If we are courageous and optimistic, we can strike a good bargain with our friends across the Channel, come out well and on time - by Oct 31 - and start delivering on all the hopes and ambitions of the people."

The prospect of a "no-deal" Brexit was fast becoming the central battle of the race to succeed Mrs May.

Environment secretary Michael Gove joined a crowded field of hopefuls with competing visions of how to finally pull their divided country out of the EU.

Mr Gove's bid for the leadership in the aftermath of the 2016 Brexit referendum scuppered the chances of his one-time ally Mr Johnson, who is also running this time around and is seen as the current favourite. 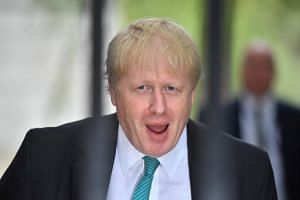 British environment minister joins race to replace May as PM

Some of the eight contenders to replace Mrs May have said they will seek to negotiate changes to a draft divorce deal struck with the EU last year but would be prepared to proceed with a no-deal Brexit if refused.

Finance minister Philip Hammond warned on Sunday that he might even be prepared to take the drastic step of voting to bring down a future Conservative government in order to avoid no-deal.

Former Brexit secretary Dominic Raab, an even more committed eurosceptic, has echoed that position. "We'd be willing to walk away from the negotiations," he told the BBC's Andrew Marr.

Ms Esther McVey, another contender, set out a similar position. "We won't be asking for any more extensions," she said.

Mr Raab and foreign secretary Jeremy Hunt announced their candidacies in the Sunday papers. Mr Hunt had campaigned against Brexit in 2016 but has since reversed his stance.

Former House of Commons leader Andrea Leadsom, whose resignation last Thursday pushed Mrs May towards stepping down, has also confirmed she will run.