PARIS (AFP) - Nerve agents such as that used to try and kill a former Russian double-agent in Britain, were first developed as neurotoxins by German scientists in the 1930s, but never used as chemical weapons in World War II.

Q: What is a nerve agent?

A: Nerve agents are the most toxic known chemical warfare agents. They are a type of organophosphate chemical, like certain pesticides, and attack an enzyme called acetylcholinesterase that is crucial for controlling nerve signals.

"A nerve agent affects the nervous system by interrupting communications between the brain, the main organs, and muscles," Jean-Pascal Zanders, a biological weapons expert at France's Foundation for Strategic Research, told AFP.

"It prevents coordination between the organs, people can no longer breathe, for example, and asphyxiate." .

Q: Are there different types?

A: Sarin and VX are the best known nerve agents. Others include soman and tabun.

Sarin, soman and tabun are clear, colourless, tasteless liquids, while VX is clear, odourless and has a consistency more like motor oil.

Sarin is odourless, and evaporates at the same rate as water. Tabun has a fruity odour, while soman smells like camphor.

Q: How are they used?

A: Sarin, soman and tabun are sprayed in vapour form, and enter the body by breathing. If a high concentration is inhaled, death can occur in seconds or minutes. 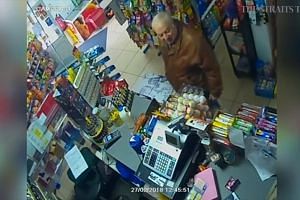 Sarin gas was used in the 1995 Tokyo subway attack by a doomsday cult that killed a dozen people, and is alleged to have been used against civilians in the Syrian war.

It was also infamously used by Iraqi dictator Saddam Hussein's regime to kill thousands of Kurds in 1988.

VX enters through the skin, which takes a bit longer, with symptoms appearing in about 20 to 30 minutes.

It has been identified as the agent that killed North Korean leader Kim Jong Un's half-brother in February 2017 when two women sprayed a liquid in his face.

Nerve agents can also spread when a person touches the skin or clothing of another who has been exposed, or consumed in contaminated liquids or foods.

Q: What are the symptoms of exposure?

Other sources: Centres for Disease Control and Prevention, Virginia Department of Health, Science Media Centre, Organisation for the Prohibition of Chemical Weapons.