BERLIN (REUTERS) - Three-quarters of Germans do not believe Chancellor Angela Merkel will manage to secure a European solution to the immigration dispute that is plaguing her relationship with her Bavarian allies in government, a survey showed on Wednesday (June 20).

The survey of 5,038 people by pollster Civey for newspaper Die Welt showed that 74.7 per cent were sceptical, while 18.1 per cent believed Dr Merkel would conduct successful negotiations.

Mr Horst Seehofer, CSU leader and Germany's Interior Minister, wants to turn away migrants who have already registered in other EU states, but Dr Merkel opposes any unilateral move to reverse her 2015 open-door policy and undermine her authority.

But he pointed to comments from Mr Seehofer that preparations would be made in case Dr Merkel was unsuccessful so the federal police could reject migrants who have registered elsewhere from the first week of July.

"This is necessary. We can no longer look on as this refugee tourism across Europe happens," Mr Herrmann said. 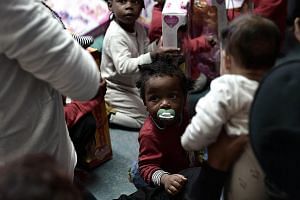 He added that rejecting from July 1 migrants who have already registered in other EU countries would be legal. "It's the existing law."

Mr Volker Kauder, head of the CDU/CSU parliamentary group, warned Germany against taking unilateral action on refugee policy, telling broadcaster ZDF: "I believe that in the end, we can only solve the problem with our European neighbours and not by going it alone."

He expressed optimism that Dr Merkel would manage to seal deals with European partner countries to take back refugees.

Austrian Chancellor Sebastian Kurz is likely to meet Dr Merkel and other European leaders this week to discuss migration, he said on Wednesday.