PARIS (AFP) - The granddaughter of former French president Francois Mitterrand confirmed on Friday (Feb 9) that she was the woman behind a two-decade-old rape claim embroiling popular environment minister Nicolas Hulot.

Having been exposed by the Parisien newspaper, Pascale Mitterrand issued a statement corroborating a report which claimed she had filed a complaint against Hulot, a celebrity environmentalist and TV star, in 2008.

But her lawyer Michel Dufranc stressed that "Pascale Mitterrand's name has been linked without her consent to a media storm around Nicolas Hulot. She and her family in no way welcome this publicity."

Her legal complaint against Hulot did not lead to an investigation because it was filed more than 10 years after the alleged crime - beyond the statute of limitations - but it has come back to haunt the minister this week.

Weekly magazine Ebdo published a lengthy piece on the alleged sexual assault at one of his homes in 1997 which Hulot emphatically denied in an emotional television interview on Thursday.

The magazine article did not name Mitterrand, but it said she was a member of a prominent French family who was 20 years old at the time of the alleged rape, when Hulot was 42.

She gives few specific details of her allegations in her interview, but prosecutors in the northern city of Saint-Malo confirmed Thursday the complaint was for alleged rape.

"My daughter became different after that," her father - now identified as Socialist politician Gilbert Mitterrand - told Ebdo, describing how she quit her job and went travelling to get away from France.

The case has prompted debate in France over whether the magazine - which launched only last month - should have unearthed an old case which had not been investigated by police.

Ebdo justified its decision by pointing to the sexual harassment allegations ricocheting around the world, including in France, since the scandal over Hollywood producer Harvey Weinstein. 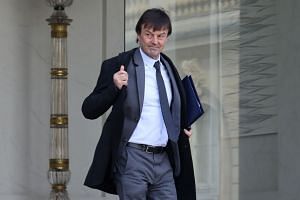 "Too many women have been subjected to domination and being preyed upon for too long," it said in an editorial, saying it was time for the culture of "impunity" to end.

While acknowledging the case involved "one person's word against another", it said Hulot's status as a public figure meant it had a duty to publish the allegations.

In her interview, Mitterrand says she reluctantly decided to file a police complaint against Hulot after reflecting on it for years.

"My goal was not to see him brought to trial, but to make him think about what he'd done," she said.

The government has rallied around the environment minister, with Macron saying there is no "reason why he should resign".

The row involving Hulot, who has forged a three-decade career as an environmental campaigner, comes hot on the heels of a rape claim against a second member of Macron's cabinet.

A former call girl claims he pressured her into sex in 2009 in exchange for helping her clear her name in a legal dispute, which Darmanin has also denied.