LONDON (AFP) - Mr Bill Gates warned on Wednesday (April 18) that malaria was back on the rise again and would continue to claim more lives worldwide unless governments reinvigorated their push to eradicate the disease.

Malaria death rates have been in steady decline since 2000 but rose again in 2016 as progress towards eliminating the mosquito-borne preventable disease stalled.

Microsoft co-founder turned philanthropist Gates said innovation would be crucial to keep progress in tackling the disease ahead of its ability to develop resistence to drugs and insecticides.

"This setback where the 2016 cases went up is a real signal to us," Mr Gates, the second richest person in the world, told the 2018 London Malaria Summit, where experts gathered to plot the way forward.

"The funding has to be long-term and we've got to get smarter.

More than 445,000 people died from malaria in 2016, mostly children under five and pregnant women. One child dies every two minutes from the disease. There were 216 million cases in 2016 - 90 per cent of which were in Africa. 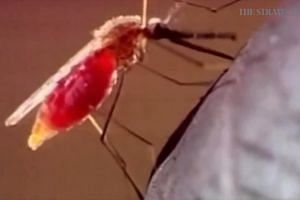 Child killed by malaria in Italy caught disease in hospital

Malaria is estimated to cost the African economy more than US$12 billion (S$15.7 billion) per year and can swallow up to 40 per cent of a country's healthcare spending.

Deaths from malaria dropped by more than 60 per cent between 2000 and 2015. Mr Gates said that around seven million lives had been saved since he began investing in 1999 and several countries had been declared malaria-free.

"Progress against malaria has been one of the most impressive successes in global health in this generation," the US philanthropist said.

However, he warned: "If we don't keep innovating, we will go backwards. If we don't maintain the commitments, malaria would go back up and kill over a million children a year, because the drugs and the insecticides always are evaded by the mosquitos and parasites.

"Unsurprisingly, I view data as the lifeblood of how we're going to be smarter."

Attendees at another health conference this week in Dakar heard how particularly African countries suffering from famine or conflict have seen a spike in malaria infections and deaths.

Experts also warned that blood transfusions are a risk factor for malaria, with a study in Nigeria finding that nearly a quarter of the blood stocks in some sub-Saharan countries contain malaria parasites.

The London gathering is taking place on the fringes of the biennial Commonwealth summit. Mr Gates said 90 per cent of people living in the Commonwealth were at risk of catching malaria.

Summit host Britain has called on the 53 Commonwealth nations to commit to halving malaria throughout the member states by 2023.

"It is an ambitious goal, but one that is firmly within our reach," said British Prime Minister Theresa May.

"Malaria devastates lives worldwide but it has a particular impact on the Commonwealth. And we, as a Commonwealth, have a duty to tackle it."

Stakeholders were expected to pledge more than £2.7 billion (S$5 billion) of funding into research, data tools and malaria interventions.

World Health Organisation Director-General Tedros Adhanom Ghebreyesus - who twice caught malaria and lost a brother to it - said a "fresh fight" was needed to hold the gains made in fighting the disease.

"Finance is on the decline," the Ethiopian diplomat told summit delegates.

"We have to renew the political commitment."