LONDON (BLOOMBERG) - The world's largest restaurant chain will begin to phase out plastic straws in some European markets as concerns about consumer waste mount.

McDonald's will start rolling out paper straws in the United Kingdom and Ireland, with plans to phase out the plastic variety in all 1,361 locations there in 2019.

The company, which has also been testing alternatives in Belgium, will begin trials in select restaurants in the United States, France, Sweden and Norway later this year as it seeks to source more of its packaging across the globe from recycled sources.

The move by McDonald's comes as plastic waste has come under fire globally, particularly for contributing to ocean pollution and harming birds and sea mammals. In May, McDonald's shareholders overwhelmingly rejected a proposal asking the company for a report about the business risks associated with plastic straws.

The chain may be forced to phase out plastic straws whether they want to or not.

British Prime Minister Theresa May said earlier this spring that she aims to ban the sale of single-use plastic straws.

The European Union proposed a ban on plastic straws in May, and the Indian government has pledged to ban single-use plastic by 2022. 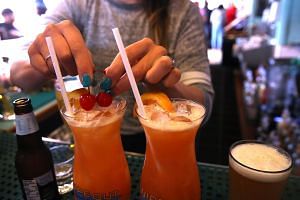 Seattle bans plastic straws, but US still has a long way to go

KFC to go straw-free, cut use of plastic lids

Given the size of the company's purchasing power, McDonald's says it hopes the shift will "support industry-wide change and bring sustainable solutions to scale", said Ms Francesca DeBiase, head of global supply chain and sustainability at the company.