FRANKFURT AM MAIN (AFP) - A high-school dropout who grafted his way into the EU corridors of power, Germany's Mr Martin Schulz is used to battling the odds. But taking on Dr Angela Merkel may be his most unenviable challenge yet.

When the bearded 61-year-old announced in January that he was giving up his role as European Parliament chief to become the Social Democratic Party (SPD) leader and its candidate for chancellor, he was welcomed home with open arms.

The so-called "Schulz effect" saw the Social Democrats surge in the polls, and a YouTube song captured the enthusiasm with the lyrics: "The Schulz train is rolling, and it has no brakes, it's running at full steam to the chancellery."

But the train soon ran out of steam.

In what by many accounts has been a sleepy campaign for the Sept 24 vote, Mr Schulz has struggled to maintain momentum while Dr Merkel, by doing very little, is seen more than ever as a reliable pair of hands in an uncertain world.

A recent survey by pollster Emnid found that 46 per cent of Germans would vote for Dr Merkel if the chancellor were elected directly, compared with 28 per cent for Mr Schulz.

"Martin Schulz's position is unenviable, that much is true," Berlin's Tagesspiegel newspaper wrote, dubbing him "the shadow-boxer" because of his frustrated attempts to spar with Europe's most powerful woman.

Mr Schulz's electoral hopes have dwindled despite his best efforts to shed his image as a European bureaucrat and play up his compelling, pull-yourself-up-by-your-bootstraps life story.

After leaving high school without graduating, Mr Schulz suffered a knee injury that dashed his dream of becoming a pro footballer.

Barely in his twenties, a despondent Schulz turned to alcohol, an addiction he eventually overcame and talks openly about.

Seizing what he has called a second chance in life, he opened a bookshop.

He took an early liking to politics and was elected mayor of the western town of Wuerselen at 31 - the youngest-ever official to hold such a post in the populous state of North Rhine-Westphalia. He served for 11 years.

In 1994, the Social Democrat was elected to the European Parliament and stayed in Brussels for the next two decades, rising to become president of the EU's only elected body in 2012. 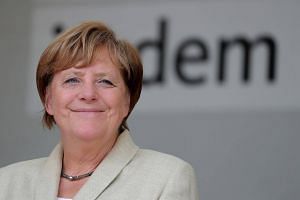 Mr Schulz, who taught himself five languages, said his past struggles shaped who he is today.

"I believe I'm the only senior politician in Germany to openly admit my personal catastrophes," Mr Schulz told Der Spiegel weekly in a recent interview.

"Some people have a problem with that. But others say: he fought his way out of that mess. He's not as polished as other politicians."

While some accuse him of being precisely the kind of Brussels insider voters distrust, the staunchly pro-European Schulz says his connections make him a heavyweight on the global stage.

"When you have been in Europe as long as I have, you know every Tom, Dick and Harry," he once bragged.

For more than 30 years, Mr Schulz has been married to Inge, a landscape architect who studiously avoids the limelight.

"You can handle the politics on your own," Mr Schulz said she told him at the start of his career.

The couple have two grown children, a son and daughter.

Commentators say Mr Schulz's slide in the polls is partly due to bad luck.

"Martin Schulz is farther away from victory than ever before," the Spiegel said, labelling the veteran politician a "Pechmagnet" or magnet for bad luck.

But observers say he has also made mistakes.

With the economy humming and employment at a record high, his calls for a fairer, more equal Germany have gained little traction.

Attempts to criticise Dr Merkel's refugee policy have also fallen flat since the SPD, as the junior coalition partner, can't credibly claim to have opposed her decisions at the height of the crisis.

Mr Schulz has also been accused of throwing in the towel too soon by already stating that he plans to stand for re-election as SPD leader even if he loses the election.

"Who is going to go out and fight for a candidate who seems to have accepted defeat?" asked the Tagesspiegel.