PARIS (AFP) - French police have arrested a man in connection with the disappearance of a nine-year-old girl during a wedding in the Alps last weekend, officials said on Thursday (Aug 31), though searchers have yet to find any clues to her whereabouts.

Maelys de Araujo was last seen at 3am on Sunday at the community hall in the village of Pont-de-Beauvoisin, about 50km north of Grenoble.

Her parents alerted the police to her absence about an hour later, and scores of police, search and rescue teams, divers and cavers have been searching the heavily wooded area for signs of the girl.

The suspect being questioned is a 34-year-old friend of the groom who had been invited to the wedding party but arrived late, a source close to the investigation said.

Officials are focusing on "clarifying the activities of this person, who left the event during a period that could correspond with Maelys' disappearance," a state prosecutor, Dietlind Baudouin, said in a statement. 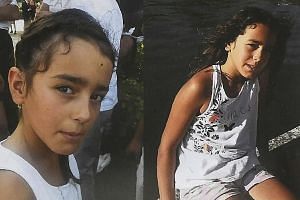 French hunt for girl who vanished at party

The case is being treated as a kidnapping, though the prosecutor said investigators were being cautious not to draw "hasty conclusions".

"The important thing is to give ourselves the most chances of finding Maelys as quickly as possible," Baudouin told journalists later.

"So with this in mind, we are exploring every possible lead, no matter how small or how remote."

A source told AFP earlier that the arrested man was "near the wedding venue" when the girl disappeared, and that his account of his whereabouts that night contained inconsistencies.

Police have interviewed about 250 people since Sunday, police said, including most of the 180 guests at the wedding, as well as several others who attended parties held the same night at a nearby bar and church hall.

Sniffer dogs lost the scent from Maelys' cuddly toy in a car park outside the venue, raising fears she was kidnapped and whisked away by car.

A gendarme squad from the Paris region arrived Wednesday to assist in the search, including a closer look at areas already examined, but without success.

On Thursday teams expanded the search to fields and roadsides surrounding the wedding venue.

"We're getting farther and farther away from the site of the disappearance," a source close to the inquiry told AFP.

"We've double-checked all the leads we have. We still think that she was probably taken away in a vehicle."