BERLIN (REUTERS) - A 40-year-old Eritrean refugee accused of killing an eight-year-old boy by pushing him under a train in Frankfurt was wanted by police in Switzerland, where he was being treated for psychological problems, authorities said on Tuesday (July 30).

In Monday's incident, which horrified Germany, the man first pushed the boy's mother onto the track but she rolled away.

He then shoved the boy under an oncoming train before trying to push a 78-year-old woman, who fell over on the platform, Germany's federal police chief Dieter Romann said.

On Thursday, he had also brandished a knife at a female neighbour in Switzerland and threatened to kill her, before fleeing, Romann said.

In Zurich, cantonal police officer Bruno Keller said an investigation had uncovered "no evidence of radicalisation or ideological motive" for the man's actions.

Romann identified the man as "A", in keeping with German police practice of not releasing suspects' full names.

Police caught him as he tried to flee Frankfurt station. 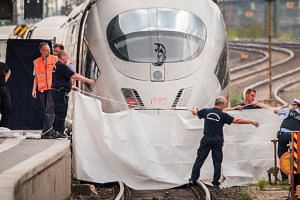 Man pushes boy in front of train in Germany, killing him

Prosecutors in the city have applied for a formal warrant to arrest him on one charge of murder and two of attempted murder, state prosecutor Nadja Niesen said.

If convicted he would face a life sentence.

"There is no indication that he was under the influence of alcohol or drugs," Niesen told reporters.

The man, who has three children, arrived in Switzerland in 2006, was granted asylum there in 2008 and had integrated well, Romann said.

Zurich police said the man, who had no convictions for violent behaviour, had suffered psychological problems that had kept him off work since January.

Officers were called to an address to the south of Zurich, on Thursday after the man locked his wife and children in their apartment along with a neighbour. He had also threatened his neighbour verbally and with a knife, police said.

The people were freed unharmed and police said he was put on a wanted list after he fled.

Niesen said there was no reason to think Monday's incident was linked to a case last week in Waechtersbach near Frankfurt in which a German attacked an Eritrean and then killed himself.