VALLETTA (AFP) - Moscow on Saturday (May 30) denied US reports that US$1.1 billion (S$1.5 billion) in Libyan money printed in Russia and seized by Maltese authorities was counterfeit.

The US State Department hailed Malta's announcement about the seizure, saying it was "ordered by an illegitimate parallel entity".

Friday's statement from the US State Department, said: "The Central Bank of Libya headquartered in Tripoli is Libya's only legitimate central bank.

There was no official statement on Saturday from Valletta, although Malta Today newspaper had published a report about US$1.1 billion in counterfeit money seized in Malta on its Facebook site that was no longer available.

But the statement on Saturday from Russia's foreign ministry said: "We would like to note that under the conditions of de facto double power in Libya, there are currently two central banks."

Libya is split between the internationally recognised Government of National Accord (GNA) in Tripoli and forces loyal to eastern-based strongman Khalifa Haftar, who has waged a year-long battle to try to capture the capital.

The Russian statement said Haftar had been properly elected, named by the Libyan parliament and had the required international recognition.

"What are false are not these Libyan dinars but the American declarations," it added.

Goznak, meanwhile, issued its own statement to Russian news agencies, insisting that a UN committee had examined the delivery of the cash and had found no violation of the sanctions in place against Libya.

In a December report to the UN Security Council, UN experts said Goznak JSC had delivered the equivalent of some US$7.11 billion in Libyan money between 2016 and 2018 to the parallel central bank. 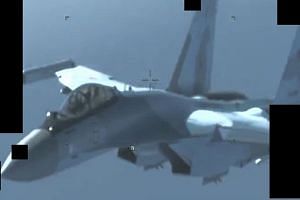 The US State Department said it would continue working with the United Nations and international partners "to deter illicit activities that undermine Libya's sovereignty and stability..."

" This incident once again highlights the need for Russia to cease its malign and destabilising actions in Libya," it added.

The US military has also said Russia recently sent warplanes to Libya to support mercenaries on the ground fighting beside Haftar's forces.

On Thursday, Malta's Prime Minister Robert Abela visited Libya to discuss illegal migration with the head of the GNA, Fayez al-Sarraj, and signed a memorandum of understanding on the issue.

Since Moamer Kadhafi's regime fell in 2011, Libya has been plunged into chaos.