AMATRICE, Italy  (REUTERS) – The death toll from a devastating earthquake in central Italy climbed to at least 250 on Thursday (Aug 25) and could rise further with rescue teams working for a second day to try to find survivors under the rubble of flattened towns.

The 6.2 magnitude quake struck a cluster of mountain communities 140km east of Rome early on Wednesday as people slept, destroying hundreds of homes.

Dozens of emergency workers with sniffer dogs clambered over piles of debris trying to find anyone still buried beneath, while cranes removed huge slabs of fallen masonry and trucks full of rubble left the area every few minutes. 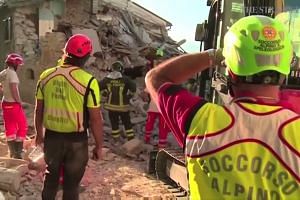 Race to save lives under the rubble

“People like myself have lost everything, but at the same time the fact that we have survived means we have to move forward one minute at a time,” said Alessandra Cioni, 45, who managed to crawl out of her crumpled house after the quake. “We have been saved, not like half the people in this place who have lost their lives,” she said, breaking down in tears.

A violent aftershock on Thursday afternoon sent rescuers fleeing as stones fell from the already severely damaged bell tower of the 15th century church of St. Augustine in Amatrice.

The jolt, which struck fear and panic in survivors, detached the church’s facade, leaving it leaning dangerously over the main street where the emergency services were working under blue skies and hot summer sun.

The original earthquake was powerful enough to be felt in Bologna to the north and Naples to the south, both more than 220km from the epicentre.

Almost 200 of the victims died in Amatrice, which is famed for a local pasta dish and was full of holidaymakers ahead of its 50th annual food festival, set for this weekend. Up to 15 tourists were believed to have been buried when the town’s Hotel Roma imploded.

It was unclear how many seasonal visitors were in the area on Wednesday, making it hard to track the number of deaths.

“We need to know firstly the exact number of people who are missing before we can say what work is waiting for us,” fire department spokesperson, Luca Cari, said. “We will obviously move forward without interruption until we are sure there is no one left.”

One Spaniard, five Romanians, and a number of other foreigners, some of them care-givers for the elderly, were believed to be among the dead, officials said.

The nearby towns of Pescara del Tronto, Arquata del Tronto and Accumoli fared little better, leaving thousands of people homeless. The Civil Protection Department has sent up tents for some of the survivors and there was no official comment on how long reconstruction work might take.

Italy has a poor record of rebuilding after quakes. Some 8,300 people who were forced to leave their houses after a deadly earthquake in L’Aquila in 2009 are still living in temporary accommodation, waiting for their homes to be restored.

About 365 people injured in Wednesday’s quake were hospitalised, the Civil Protection said, noting that about 5,000 people, including police, firefighters, soldiers and volunteers, were involved in post-quake operations.

Rescuers working through the night and illuminated by banks of lights saved a 10-year-old girl, pulling her alive from the rubble where she had lain for about 15 hours.

Many other children were not so lucky. A family of four, including two boys aged eight months and nine years, were buried when a church bell tower toppled into their house in nearby Accumoli. Magistrates opened an investigation into whether there had been any negligence in the recent restoration of the tower.

Another investigation was opened into why Amatrice’s school had collapsed, despite the fact it had only opened in 2012 and was meant to have been earthquake-proof. 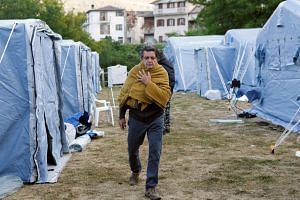 Most of the buildings in the area were built hundreds of years ago, helping to explain the widespread destruction. Cultural Minister Dario Franceschini said all 293 culturally important sites, many of them churches, had either collapsed or have been seriously damaged.

Prime Minister Matteo Renzi’s Cabinet was due to meet on Thursday to decide emergency measures to help the affected communities. “Today is a day for tears, tomorrow we can talk of reconstruction,” he told reporters late on Wednesday.

The head of the Civil Protection Department said he feared the death toll might surpass that in L’Aquila, which killed more than 300 people.

While hopes of finding more people alive diminished by the hour, firefighters’ spokesman Luca Cari recalled that survivors were found in L’Aquila up to 72 hours after that quake.

Most of the damage was in the Lazio and Marche regions, with Lazio bearing the brunt of the devastation and the biggest toll. Neighbouring Umbria was also affected. All three regions are dotted with centuries-old buildings susceptible to earthquakes.

Italy sits on two fault lines, making it one of the most seismically active countries in Europe.

The country’s most deadly earthquake since the start of the 20th century came in 1908, when an earthquake followed by a tsunami killed an estimated 80,000 people in the southern regions of Reggio Calabria and Sicily.