PARIS (BLOOMBERG) - Less than a month ago, French President Emmanuel Macron staked his claim as the flag-bearer for globalism. In a speech to 60 world leaders at the Arc de Triomphe, he eulogised the United Nations and declared nationalism the "betrayal" of patriotism.

For the first time in his presidency, Mr Macron backed down. It was a humbling moment for opponents of the populist revolts that spawned US President Donald Trump.

Europe has seen many a critical juncture in recent years, from the Greek debt crisis to the anti-immigrant backlash against refugees and Britain's Brexit vote. Rarely, though, have so many political vultures been circling around one leader with so much at stake for the world order.

Poland is flirting with the far right, and nationalist parties cajoled by Hungarian Prime Minister Viktor Orban are plotting a rebellion at European Parliamentary elections in May.

Meanwhile, Italy has collided with the European Union by taking a defiant stand on its budget spending.

With the EU's erstwhile firefighter, Dr Angela Merkel, planning to step down as German chancellor, the baton was supposed to pass to Mr Macron to uphold liberal democracy.  But Dr Merkel's power on the world stage was underpinned by a political fortress at home, and the French leader looks anything but solid.

"You can't make speeches about defending the international order when your popularity is at 20 per cent and there are protesters in the street," said Mr Nicholas Dungan, a Paris-based senior fellow at the Atlantic Council. "It's very difficult to get your credibility back."

It's a stark contrast to the weekend of Nov 11 as leaders marked a century since the end of World War I. Mr Macron championed the need for global cooperation while Mr Trump cut an isolated figure. Europe's divisions were laid bare that day as Polish government officials marched through Warsaw with far-right groups to mark the country's Independence Day. Mr Macron, though, stood firm as Europe's statesman.

The images televised around the world last weekend were of burning cars in the French capital. The retreat by the 40-year-old French leader was mocked by Mr Trump. Mr Macron admitted, via his prime minister, that he's not been able to connect with the French people.

The trouble for opponents of Trump-style nativism and protectionism is that there's no one else to take up his mantle, Mr Dungan said.

After Mr Macron was elected in May 2017, he sought to work with Dr Merkel and a friendly government in Rome to deepen European integration. He reached out to Mr Trump to convince the American president to stick to international agreements.

Mr Trump ignored him and withdrew from the Iran nuclear accord and the Paris climate agreement. He has tweeted that Mr Macron's climb down over a carbon tax that would raise fuel prices was proof that he'd been right all along. 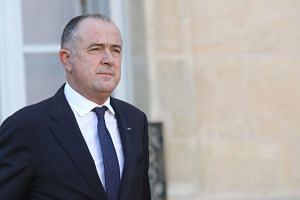 We're going to the Champs-Elysees to fight, I want Macron's scalp: French protester

Dr Merkel, meanwhile, was wounded in German elections in September 2017 and is about to be replaced as the head of her party, almost certainly by someone less keen on European integration. Italy elected a eurosceptic government in March.

"(Mr Macron's) ambitions for a strong Europe had already taken a hit from events in Germany and elsewhere," said Mr Philippe Moreau Defarges, an adviser at the Paris-based French Institute for International Affairs. "But he emerges seriously weakened from the recent events. He's just not appeared up to the level, and France's image has taken a terrible blow."

At home, his popularity has been sinking, hurt by the failure of his early unpopular changes to labour and tax law to revive the French economy. Mr Macron's policies are seen to favour the wealthy, and poll after poll have shown the French electorate thinks the former banker is aloof and arrogant.

His approval rating is at 28 per cent, according to an average of seven polling institutes.

Then came the "Yellow Vests".

The grassroots protest movement was sparked by opposition to his environmental policy of hiking taxes on diesel and petrol to fund incentives to buy cleaner cars and home housing systems.

But it's evolved into widespread anger about the rising cost of living and declining services in rural and small-town France.

The protesters' demands have expanded accordingly. Some want to restore the wealth tax, increase pensions, raise the minimum wage, cut the salaries of politicians, and even have Macron resign and replace the National Assembly with a "people's council".

Polls show three-quarters of the French support their demands, even if they also disapprove of the violence that has accompanied many of the protests.

Mr Macron doesn't face national elections until 2022, and he has always said he doesn't care about popularity polls. French opposition parties will file a joint no-confidence motion against the government on Monday. It is unlikely to make much difference.

But European elections and a series of municipal and regional votes over the next two years could shape up as referendums on his policies, according to Mr Antonio Barroso, an analyst at Teneo Intelligence, which looks at political risk.

"Whether Macron will have enough political space to implement more economic reforms will probably be determined by the European Parliament elections, which will likely be interpreted as a 'midterm vote' on the presidency," Mr Barroso said.

Even after Mr Macron climbed down on the fuel taxes, the Yellow Vests have said they won't dismantle their roadblocks and blockades. While they don't have the formal organisation of populist groups Italy's Five Star Movement, the momentum is with them. Copycat protests have spread to Belgium and the Netherlands.

Most of its members will vote for either Ms Marine Le Pen's anti-immigrant National Rally or Mr Jean-Luc Melenchon's far-left France Unbowed, said Professor Marc Lazar, a professor at Sciences Po in Paris. Both party leaders were defeated by Mr Macron last year and eye another shot at power.

The worry for the EU is that neither of them are defenders of the bloc's integrity.

Any breakthroughs by those parties in May's European elections will make it difficult for Mr Macron to push on with his agenda - for France and beyond.

"Macron emerges from this extremely weakened and isolated," said Prof Lazar. "Both at home and in Europe."