PARIS (AFP) - French President Emmanuel Macron aims to kick-start a new chapter in his presidency with a series of policy announcements based on a major voter listening exercise launched in response to the "yellow vest" revolt.

Mr Macron will give a speech on Monday (April 15) at 1800 GMT (2am on Tuesday, Singapore time) setting out the "first concrete measures" to be taken in response to the grievances aired at over 10,000 townhall-style meetings between January and March or posted online, the presidential office told AFP.

One of Mr Macron's aides told AFP that the country could look forward to "a new act" in his nearly two-year-old presidency, marked by "profound changes" aimed at drawing the line under five months of often violent anti-government protests.

The task of trying to satisfy the many, sometimes competing, demands emanating from the "Grand National Debate" will be a tricky one for the 41-year-old leader, whose reform drive was abruptly knocked off course by the yellow vests.

Summing up the weight of anticipation on Mr Macron's shoulders, Senate leader Gerard Larcher, a member of the opposition Republicans, told Le Figaro newspaper last Saturday: "He won't get a second chance."

The yellow vest movement, so called for the fluorescent jackets worn by demonstrators, began in rural and small-town France over fuel taxes and quickly snowballed into a broader anti-capitalist, anti-establishment rebellion.

In January, Mr Macron launched a series of debates to try to take the heat out of the protests.

Between Jan 15 and March 15, nearly 500,000 people took part in 10,134 meetings in community halls across the country, with hundreds of thousands more filling out questionnaires or offering up unprompted suggestions on the official debate website.

Mr Macron, who criss-crossed the country to engage local mayors and residents in marathon discussions, promised the French at the outset of the process to "transform anger into solutions" afterwards.

But as they returned to the streets of Paris and other cities last Saturday for their 22nd straight week of protests, many yellow vests dismissed whatever he had to offer. 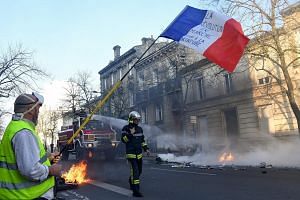 France's yellow vests and the limits of more social spending

"Great National Debate, great blah blah" and "Macron, we expect nothing from your announcements" read some of the banners waved by protesters in Paris.

Interior ministry figures put the number of demonstrators at 31,000 last Saturday, a far cry from the 282,000 that took part in the first edition, but up from 22,300 a week before.

Former investment banker Macron was caught off guard when many first-time protesters began occupying roundabouts in mid-November to protest against policies widely seen as tilted towards the rich and big business.

Admitting to failures, he unveiled a €10 billion (S$15.3 billion) package of tax cuts and income top-ups for the working poor and pensioners and travelled into the rural heartland to try to reconnect with voters.

But most yellow vests boycotted the consultations, accusing Mr Macron of pre-judging the outcome by taking their top demands - including the return of a popular "solidarity tax" on the rich which he cut and citizen-sponsored referendums - off the table from the outset.

Young people also were markedly absent from the process.

The debate, he said, had shown up "enormous exasperation" over the country's tax burden, the highest in the world, according to the Paris-based Organisation for Economic Cooperation and Development, with taxes equivalent to 46.2 per cent of gross domestic product (GDP).

Any move to offset tax cuts with steep spending cuts could bring the combative French onto the streets in even greater numbers.

"If he succeeds, he's back on the road to 2022 (the next presidential election). If he fails to convince, his capacity to carry out reforms will be jeopardised."

Beyond the frustration with taxes and elites, the debates showed that ordinary citizens are impatient to have more of a say in the running of the country.

Mr Philippe called it one of the "deafening" messages of the process, and vowed that Mr Macron, who is looking for a second wind ahead of next month's European Parliament elections, would respond.

The former economy minister, who campaigned on a message of political renewal, is expected to curb the privileges enjoyed by senior civil servants and former presidents - a source of fierce resentment among voters.

Presidential aides have hinted he will also push ahead with plans to reduce the number of national lawmakers, increase the number of civil servants involved in service delivery at local level and put a greater focus on climate change.