HELSINKI - Singaporeans, who are living longer, can help to offset the low birth rates if more of them continue working for longer, Dr Amy Khor, Senior Minister of State for Health, said on Tuesday (July 9).

She was speaking at the opening of the High-Level Forum on the Silver Economy in Helsinki.

Organised by the Finnish government and the Global Coalition on Ageing, the two-day forum, which brought together participants from 45 countries, is part of a myriad of events being held this year leading up to the United Nations' Decade of Healthy Ageing 2020-2030.

"This brings opportunities for greater labour force participation at older ages, and is important for a country like Singapore where birth rates are relatively low," she told the audience.

But, on the flip side, she said longer lives had also brought us "face to face with the disease burden and frailty that comes with old age".

In the seven years between 2010 and 2017, chronic diseases increased significantly in Singapore's population, with high cholesterol levels jumping by 33 per cent - partly fuelled by unhealthy lifestyles and habits.

The Ministry of Health (MOH) also estimates that half the number of healthy Singaporeans at age 65 could become severely disabled later in life and will need long-term care. 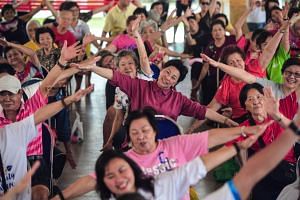 Singaporeans' average life expectancy to reach 85.4 years in 2040, third-highest in the world: Study

So, Dr Khor said, the Government's focus is to "help our seniors maintain their desired quality of life even in old age, and can afford the healthcare that they need, while ensuring financial sustainability in the healthcare system in the face of longevity".

She then provided a summary of the healthcare subsidies available, how the MOH is encouraging people to screen for diseases early - four in five Singaporeans aged 40 years and older do so now - and how it is working with food manufacturers to provide healthier options.

She said: "By supporting Singaporeans to actively manage their health and well-being, we achieve two objectives: a better quality of life for our seniors in their silver years, and a reduction in the strain on our healthcare system."

Finland's Prime Minister Antti Rinne, in his opening address, pointed out that ageing was critical issue for the world.

He said: "All successful societies in future will have to take into account the phenomena of ageing."

Speaking via video link, Ms Christine Lagarde, managing director of the International Monetary Fund, told the forum that more had to be done to take advantage of those over 60 in the labour force.

She said that, for example, that there needed to be re-skilling, as skills erode over time. Many older people also wanted to continue working but, perhaps, on different terms such as on fewer days. But most societies do not cater to this.

Another speaker at the forum, Mr Niku Maattanen, research director at the Research Institute of the Finnish Economy, spoke of how seniors could "release their housing wealth" so that they had more money to spend in their later years without having to save more.

They could do this by downgrading to smaller houses, or by taking out a reverse mortgage. A survey in Finland found that more than 75 per cent of people were in favour of their parents doing this rather than holding on to their homes to pass the wealth to their children.

He said: "If seniors could release their housing wealth, many of them could buy private care services, enabling them to live at home for longer."

Singapore, where 91 per cent of people own their homes, has such schemes so seniors can monetise their housing equity to meet their healthcare and retirement needs, said Dr Khor.

But she added that Singapore was still learning from other countries on how best to help seniors with their long-term care needs.

Dr Khor said: "Our strategies to help our citizens prepare for longevity are a constant work-in-progress. They are reviewed and changed to adapt to evolving needs of Singaporeans, demographics, and societal challenges."