REIMS (AFP) - The Vatican on Tuesday (May 21) urged that a Frenchman who has been in a vegetative state for over a decade be kept alive, as doctors switched his support systems back on following a surprise court order.

The legal saga over the fate of Vincent Lambert, who has been kept alive after a traffic accident in 2008, has lasted over half a decade, splitting his family and public opinion.

Lawyers for Lambert's parents - practising Catholics who oppose any move to let their son die - said the systems had been switched back on following the court ruling late Monday.

In an extraordinary sequence of events, the Paris appeals court ruled that the life support should resume, hours after doctors had switched it off following a previous verdict from another court.

"We have the pleasure to inform you that... the hydration and feeding of Vincent Lambert has been resumed," said Jean Paillot, a lawyer for the parents, outside the hospital in the northern city of Reims.

Stepping into the debate, the Vatican said it hoped "effective solutions can be found as soon as possible to protect the life" of Lambert.

Interrupting feeding and hydration is a "grave violation of the dignity of the person," said the statement. 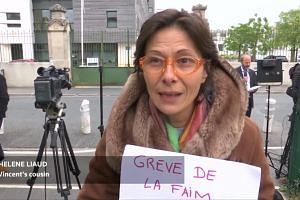 Pope Francis had also weighed in Monday in favour of keeping Lambert alive, saying: "Let us always safeguard life, God's gift, from its beginning until its natural end."

Jerome Triomphe, another lawyer for the parents who bitterly oppose the medical team treating Lambert, said the next step would be to transfer him to a new hospital.

"It is not a suspension, but a new start," he said, saying that a number of actions would be taken to seek Lambert's transfer from the Reims hospital which he described as a "true hell".

But there was no sign of the rift ending within the Lambert family, which puts the parents at odds with Lambert's wife, six siblings and a nephew who believe the most humane course is to let him die.

Lambert's mother, Viviane, 73, said at the hospital that "Vincent is not at the end of his life... he just needs something to drink and eat, and love." But his nephew Francis, speaking to Europe 1 radio, described the situation as "abject" and accused the parents of slipping into "militancy" over the last years.

An emotional video of Viviane comforting her son in his room, telling him not to cry as he appears to blink away tears, was posted Monday on the website of the conservative Valeurs Actuelles magazine.

The Paris appeals court ordered authorities "to take all measures" to keep alive Lambert, 42, pending a review by the UN Committee on the Rights of Persons with Disabilities.

Before that ruling, the European Court of Human Rights in Strasbourg had rejected a request by the parents for an injunction over the cessation of life-support pending the UN committee's decision.

The issue has also taken on political importance in France in the midst of the campaign for European elections.

French President Emmanuel Macron on Monday rejected calls by Lambert's parents and others to intervene, saying "the decision to stop treatment was taken after a constant dialogue between his doctors and his wife, who is his legal representative."

The head of the list for the opposition Republicains in the elections, Francois-Xavier Bellamy, said he was "happy" after the latest court decision to resume life support.

The UN committee on disabled rights had this month asked France to suspend the decision while it conducts its own investigation, which could take years.

The French government has said it will note the committee's deliberations but made clear there was no legal obligation for it to abide by them.

The case has re-ignited a contentious debate over France's right-to-die laws, which allow so-called "passive" euthanasia for severely ill or injured patients with no chance of recovery.