MATI, Greece, (AFP) - When the fire came, Kiriaki Alexiadou and her grandson dashed to their car and fled to safety. Their neighbours, who set out towards the sanctuary of the sea on foot, were burned alive.

Hundreds of residents and holidaymakers in the bucolic seaside village of Mati bolted with just the clothes on their backs as Greece's worst-ever fires tore through pine forests around Athens this week.

At the mercy of the furious blaze and the pummelling wind, whether they lived or died was decided by the grotesque lottery of nature.

"My husband said we had to leave with our seven-year-old grandson," Alexiadou, 62, told Agence France-Presse.

"We ran to the car as the pine cones were burning on the trees." Choking back the tears, she pointed to the charred skeleton of a house next to hers.

"The policewoman who lived there, her husband and their two children left on foot towards the sea but they were trapped by this wall of flame."

At least 81 people are now known to have died in the fires that broke out late Monday, ripping through the tinder-dry woods and remorselessly engulfing homes and vehicles. 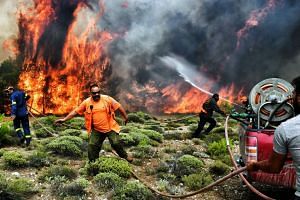 As Greek wildfire closed in, a desperate dash ended in death

They include a newly married Irishman who had been on honeymoon in Mati when his car was caught in the wildfires. Although his wife Zoe managed to escape to a nearby beach, she was taken to hospital with burns, according to British media.

As the smoke billowed over his property, Theodoros Christopoulos had seconds to decide whether to hunker down or flee towards the beach.

"There were five of us. I said 'get back in the house'. We closed the shutters - they're aluminium - and I just thought whatever happens happens," he said.

"The road was already blocked by cars trying to get out of Mati."

Christopoulos was among the lucky ones; his home is largely undamaged and all five people who hid inside survived.

Many in Mati sought refuge along the coves of the beach bordering the resort, where the detritus of the hasty escapes could be seen on Wednesday.

A sandal, a cardigan, a child's toy abandoned among the pebbles were all that remained from what local Sabi Kissov called "a night of hell".

The caretaker of a small house near the shore, he helped his employer, a 73-year-old cancer sufferer, down to the beach to wait out the inferno.

"There was at least 300 of us. The worst thing was the smoke, it hurt to breathe," Kissov said.

Those huddled next to the sea were rescued by emergency workers in boats as the flames lit up the night sky.

Others weren't as fortunate.

Just a few steps from Kissov's home, the charred bodies of 26 people were found huddled together in the sarcophagus of a villa, the steep garden cliff face of the property apparently preventing their escape.

The fire's cruel luck is streaked across the walls of some homes, which remained intact despite being damaged. Others were incinerated.

"We found everything when we got back, even the car, the cockerel and the dog," said Kissov as he watered the plants in his garden, a few yards from still-smouldering properties.

"You can't explain it, why this house, why not that one... it all happened so fast," said Fani Antonini, fixing a toppled pot plant next to the smoking remains of what was once the family home.

"At least I can still take a shower and offer you a drink, the water still works!" One street over, Christos, 48, inspected the damage to his house. A few years ago, he covered the walls with a fire-retardant substance and the home is virtually unscathed.

But the house of his elderly neighbour is ruined.

"That's another thing we've lost," he said, smiling grimly. "It was paradise here."