MOSCOW (REUTERS) - Russian opposition politician Alexei Navalny was seen walking down the stairs in a photo posted on his Instagram feed on Saturday (Sept 19), five days after a Berlin hospital said he had been taken off a ventilator and could breathe independently.

Germany says laboratory tests in three countries have determined he was poisoned with a Novichok nerve agent, and Western governments have demanded an explanation from Russia.

“Let me tell how my recovery is going. It is already a clear path although a long one,” Mr Navalny wrote.

He said in the Instagram update he still could not use his phone and had difficulties trying to pour water into his glass or climbing stairs because his legs trembled.

“There are many problems yet to be solved but amazing doctors from the Charite hospital have solved the main one,” the post said.

“They turned me from a ‘technically alive human being’ into someone who has high chances to become... a man who can quickly scroll Instagram and understands without thinking where to put his likes.”

The Kremlin said on Friday (Sept 18) that a water bottle found in Mr Navalny's hotel room could have served as evidence in his case but was instead taken out of Russia by his supporters.

Mr Navalny's team said on Thursday that the water bottle removed from his hotel room in the city of Tomsk last month had been taken to Germany and found to have traces of Novichok nerve agent.

Asked about the finding, Kremlin spokesman Dmitry Peskov said that Russian specialists had been unable to examine the bottle and that Moscow was therefore not able to comment.

"We cannot explain this because, as you know, this bottle - if it did exist - was taken away to Germany or somewhere else. So, something that could have become evidence of a poisoning was unfortunately taken out. This (raises) an additional question: why?" said Mr Peskov.

"There is too much of the absurd in this story to take anyone's word as fact," he added. 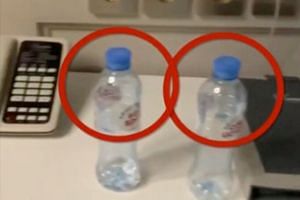 Russia has said it needs to see more evidence before a formal criminal investigation is opened into the Navalny case and has asked Germany to hand over Mr Navalny's medical data so it can be reviewed.

Though no criminal case has been opened, Mr Navalny's assistant, Mr Ilya Pakhomov, was questioned by Russian police for over five hours, the head of Mr Navalny's anti-corruption foundation in Moscow, Mr Ivan Zhdanov, told Reuters on Friday.

He saidMr  Pakhomov's interrogation was very detailed, with investigators asking questions about Mr Navalny's trip to Tomsk, in which Mr Pakhomov also took part, down to whether there had been intimate relations between members of the group.

Mr Navalny's allies have said a proper investigation into the case will show that the Kremlin, President Vladimir Putin and Russian security services are responsible for poisoning the politician.

The Kremlin has called the accusation groundless, saying it would make no sense for it to poison Mr Navalny and then allow him to travel for medical treatment in another country where the poison would be detected.