The planet's largest king penguin colony has shrunk by nearly 90 per cent, in an alarming decline.

Researchers said on Monday (July 30) that France's remote Ile aux Cochons island- located roughly half way between the tip of Africa and Antarctica - used to be blanketed by two million of the flightless birds, which stand about a metre tall.

Recent satellite images however show that the population has mysteriously collapsed with barely 200,000 of the penguins remaining.

Here are five reasons why the decline might have happened.

In 1997, a particularly strong El Nino - a cyclical weather event which occurs every two to seven years - warmed the southern Indian Ocean and temporarily pushing the fish and squid on which king penguins depend on for food out of the birds' foraging range. This resulted in population decline and poor breeding success for king penguin colonies in the region.

While El Ninos are cyclical weather events, their effects can be amplified by global warming, which can produce similar results over a longer period of time. Climate change in general on its current trajectory, will likely make the Iles Crozet - the archipelago that contains Ile aux Cochon - not viable for king penguins by mid-century. As there are no other suitable islands nearby, migration is not possible for the king penguins.

The larger the population of penguins, the fiercer the competition between individual penguins. In what is termed the density-dependent effect, the repercussions of lack of food become amplified in such a situation and can trigger "an unprecedented rapid and drastic drop in numbers". 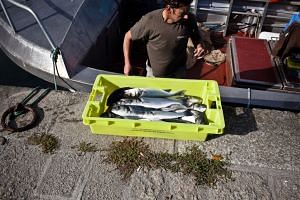 Avian cholera, which is a type of bacterial disease that affects wild and domestic birds worldwide, has a very high mortality rate. Seabirds on nearby Marion and Amsterdam Islands, including some king penguins, have been affected by the disease.

Other animals such as rats, mice or cats may have found their way onto the island and invaded the penguins' colony, and disrupted their lifestyle and population.