LONDON (AFP) - Here are brief profiles of the main participants at the wedding of Prince Harry and Meghan Markle:

Aged 12, his mother Diana's death shook Harry, who became a wild child in his youth. After a decade in the army and two tours in Afghanistan, the prince is a more settled character. He is now devoted to royal duties and his Invictus Games for wounded troops.

Raised in Hollywood, Markle graduated from Northwestern University in theatre and international relations.

She made her name starring as Rachel Zane in the US legal drama television series "Suits" from 2011 to 2017. She was also a women's rights activist.

Her two-year marriage to film producer Trevor Engelson ended in 2013.

Her Majesty has reigned since 1952. A steadfast monarch in a changing world, Queen Elizabeth has been an impeccable sovereign through more than 65 years of duty, a figure of constancy who has overseen post-war Britain into the new millennium.

PRINCE PHILIP, DUKE OF EDINBURGH: Grandfather of the groom, 96

Prince Philip has been at the Queen's side since they wed in 1947, but may not be at the wedding after the family revealed he was still recovering from hip surgery.

A naval officer, he served in World War II and witnessed the Japanese surrender. He retired from royal duties in 2017.

The duke is renowned for his off-the-cuff remarks. 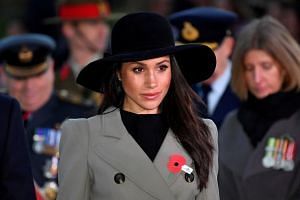 Older brother William returns the favour Harry performed at his wedding in 2011.

William, who is in line to become king after their father Prince Charles, has given up his job as an air ambulance helicopter pilot to become a full-time royal. He is now a father of three after the arrival of Prince Louis on April 23.

PRINCE CHARLES, PRINCE OF WALES: Father of the groom, 69

The heir to the throne has spent a lifetime preparing to be king. His "fairytale" marriage to Diana, princess of Wales disintegrated.

Outspoken on the environment and architecture, he also heads the wide-ranging Prince's Trust charity.

CAMILLA, DUCHESS OF CORNWALL: Stepmother of the groom, 70

Charles's former mistress married the heir to the throne in 2005. She uses one of her husband's lesser titles and has kept a low profile accompanying him on visits. Camilla is set to become princess consort upon Charles' accession to the throne.

THOMAS MARKLE: Father of the bride, 73

Thomas Markle, a former television lighting director, is now not expected to walk the bride down the aisle as he is reportedly due to undergo heart surgery Wednesday.

There was already confusion over whether he would attend after he was accused of staging some paparazzi photos of himself.

Markle worked on top US shows including "Married With Children". He won an Emmy award for his work on the soap "General Hospital".

Twice divorced, he now lives a secluded life in Mexico.

DORIA RAGLAND: Mother of the bride, 62

A social worker and a yoga instructor with dreadlocks and a nose ring, Meghan calls her mother a "free spirit".

She met Thomas while working in television make-up. She has a master's degree in social work and ran the 2017 Los Angeles marathon.

JUSTIN WELBY, ARCHBISHOP OF CANTERBURY: Spiritual leader of the Church of England

The Anglican Communion's most senior bishop will officiate as the couple make their marriage vows. A former oil executive, Welby baptised Markle after her engagement. He went to Eton College, as did Harry.

Conner is the senior cleric at St George's Chapel and will therefore conduct the service. He has been the dean since 1998 and was also the bishop to the armed forces during Harry's time in the army. He was formerly the vicar of the Cambridge University church.

Royal officials have said they will reveal details about Markle's bridesmaids nearer the time. The public will also have to wait to find out if any celebrity friends of the couple are attending.

Markle's half-brother and half-sister Thomas and Samantha. Thomas Markle Junior has said Markle is "probably embarrassed" by them and sent an open letter to Prince Harry asking him to cancel the marriage.