LONDON (BLOOMBERG) - Julian Assange spent seven years in the Ecuadorian embassy in London trying to avoid facing what he believed were imminent US charges. Now, after he finally overstayed his welcome, he will try to buy more time in the British courts.

Lawyers for the WikiLeaks founder said he will fight extradition to the United States, where he faces charges that he took part in a hacking conspiracy with former army analyst Chelsea Manning to disclose classified government material.

While Assange's attorneys argued that the charges are an illegal attempt to punish a journalist for publishing information, extradition lawyers said that the best he will be able to do is delay his arrival to the US through a process that will likely stretch into 2020.

"In theory, he could drag it out for years," said Mr Nick Vamos, a partner at law firm Peters & Peters who was previously head of extradition at the British Crown Prosecution Service.

Assange's arrest came after Ecuador expelled him from its embassy in London. The 47-year-old had been in the embassy there since 2012, when he sought to escape questioning in a Swedish sexual-assault case. While that probe was dropped in 2017, the Australian remained in a small apartment in the embassy.

WikiLeaks and Assange became famous in 2010 when the organisation published government secrets supplied by Manning. More recently, the website put itself at the centre of the 2016 American presidential race by publishing hacked e-mails from Mrs Hillary Clinton's campaign.

Extradition is generally a slow, deliberate process in British courts. Navinder Singh Sarao, the British trader accused of making US$40 million spoofing markets from his bedroom, was able to delay his extradition for 18 months until 2016, in a case that most lawyers thought could be resolved far more quickly. 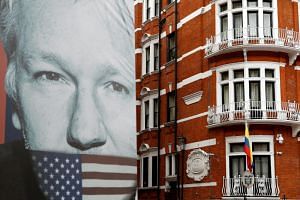 The deliberations are slowed by appeals that can go all the way to the British Supreme Court, in addition to various approvals that need to come from the Home Office.

The case could also be complicated if Swedish officials renew their extradition request. Although they dropped the probe because of the statute of limitations running out on many of the claims while Assange was in hiding, a lawyer for Assange's alleged victims asked prosecutors to reopen their investigation after the arrest.

At a court hearing in London, Assange's lawyers assailed the fairness of British and US courts, saying their client could never get a fair trial in either country. Mr Vamos said it was unlikely those types of political arguments would carry much weight and judge Michael Snow dismissed them as "laughable".

The next hearing in the case is May 2.

Assange's lawyer, Ms Jen Robinson, tried to frame the US case in terms of freedom of the press.

"This sets a dangerous precedent for all media organisations and journalists in Europe and elsewhere around the world," she said outside the London court. "This precedent means that any journalist can be extradited for prosecution in the United States for having published truthful information about the United States."

But US prosecutors may have sidestepped that defence by charging Assange only over allegations that he helped Manning hack a password on the Defence Department computer network holding classified documents.

At least two British citizens, Lauri Love and Gary McKinnon, were able to fight off extradition to the US over hacking allegations because of mental health issues. But lawyers said that both men were helped by the fact that the underlying offences occurred in Britain.

"I'm struggling to see on the face of it, the connection in the Assange case to the UK," said Mr Thomas Garner, an extradition lawyer at Gherson in London.

For Assange, the process will likely play out behind bars. After jumping bail in the Swedish assault case, it is almost certain that no judge would take a chance on releasing him again.

"He's never going to get bail while awaiting extradition," said Ms Rebecca Niblock, a lawyer at Kingsley Napley in London.