AMATRICE, Italy (REUTERS) - Italy held a state funeral in pouring rain on Tuesday (Aug 30) for some of the victims of an earthquake which levelled mountain communities last week, killing at least 292 people.

Hundreds of mourners sheltered in a marquee or under umbrellas at the service for 28 victims, including two children, in the outskirts of the town of Amatrice.

An effigy of the crucified Christ hung above a makeshift altar. Behind it lay a crumpled building, one of dozens devastated in the town by the Aug 24 quake. The scene was framed by tree-covered mountains.

Builders worked through the night to prepare the funeral site, which was moved at the last minute. Furious locals had warned they would boycott the event when they found out that authorities planned to hold it in the city of Rieti, more than 60km away. 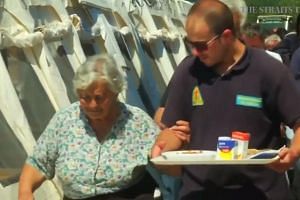 Shoddy renovations may be behind high quake toll 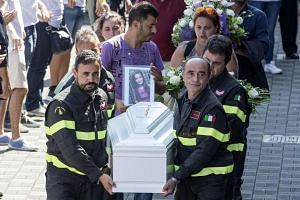 The bodies had been stored in Rieti and officials said it would be easier to hold a mass funeral there rather than in the devastated Amatrice, but Prime Minister Matteo Renzi ordered a change of plan in the face of the local anger. He attended the crowded service.

"The earthquake doesn’t kill; what kills is the works of men,” Bishop Domenico Pompili said during his homily, referring to inadequate construction techniques that may have been to blame for deadly building collapses during the quake.

“To desert these places would be to kill them a second time,” he added.

After the funeral, Renzi said the town would be rebuilt “piece by piece”.

Sister Marjana Lleshi, a nun from Albania who survived the disaster and was photographed sitting on the streets of Amatrice wearing a bloodstained veil, also spoke during the ceremony.

In the centre of the town, which was voted last year one of Italy’s most beautiful, crews continued to dig for up to 10 bodies believed still under mounds of rubble left by the 6.2-magnitude quake.

Of the 292 confirmed dead, 231 perished in Amatrice. In all, 21 children died. A number of foreigners were among the dead, including 11 Romanians and three Britons.

Many of those who died in Amatrice were not residents and their funerals are being held in their hometowns. The families of others preferred more private ceremonies to the state service.

Before the funeral, relatives placed bouquets of flowers and pictures of their loved ones on the simple wooden coffins.

“You may be able to rebuild the town, but you can’t bring back the lives that were lost,” said Giuseppina Sorrentino, a native of Amatrice, tears streaming down her face.

“This took everything away.”

It was the second state-sponsored funeral in three days. On Saturday rites were held for victims of the quake from the adjoining Marche region. Amatrice is in the region of Lazio.

Investigators are looking into work done on the bell tower in the town of Accumoli, which was recently restored but collapsed during the quake onto the home of a family of four, killing them all.

A court has sequestered a half-collapsed school in Amatrice in order to investigate possible negligence in recent construction work. The school had recently been remodelled, in part to help it withstand earthquakes.

Italy sits on two seismic faultlines. Many of its buildings are hundreds of years old and susceptible to earthquake damage.