ROME (DPA) - An Italian policeman who was stabbed to death last week in a scuffle in central Rome with two US teenagers had no gun on him, police said on Tuesday (July 30).

The slain cop, along with partner Andrea Varriale, confronted the US pair in the early hours of Friday as part of a plain clothes operation to retrieve a stolen backpack.

It would have been normal for both officers to be armed, but Cerciello Rega was not and "only he would know the reason why," Rome Carabinieri chief Francerco Gargaro said in a press conference.

The gun was found in Cerciello Rega's police station locker.

Even if he had not forgotten it, it would have not made a difference because the two Carabinieri were surprised by the Americans' sudden attack, Gargaro said. 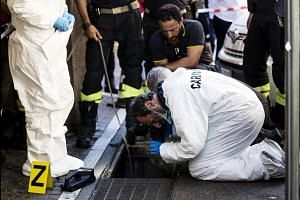 US teens arrested over killing of Italian police officer

Natale-Hjorth and Elder allegedly stole a backpack from a drug middleman who gave them aspirin instead of cocaine. They later demanded money and real cocaine to return the item.

The middleman alerted police, who showed up in his place at the agreed meeting point with the US pair. Only Elder stabbed Cerciello Rega, but Natale-Hjorth is accused of complicity in the murder.

In Italy, Cerciello Rega has been hailed as a hero, and his murder has caused widespread outrage. He had just married and was a decorated volunteer for the Knights of Malta, a Catholic charity.

But the Carabinieri have themselves come under fire for holding Natale-Hjorth handcuffed and blindfolded while in police custody, as shown by a picture that has circulated widely in the media.

The issue will be investigated "without any prejudice" and with "determination and rigour," Rome Prosecutor Michele Prestipino said in the same press conference.

Another prosecutor, Nunzia D'Elia, said all due process was followed during interrogations. She said the two US suspects were heard separately in the presence of lawyers and of an interpreter.

At first, the pair did not seem to realise the extent of what they had done, D'Elia said, quoting Natale-Hjorth as saying, "is he really dead dead?"

Elder, on his part, "shed a few tears," the prosecutor said.

In his interrogation, neither Natale-Hjorth nor his lawyer mentioned about the handcuffing and blindfolding incident, Carabinieri officer Lorenzo D'Aloia added.