PARIS (AFP) - The Islamic full-face veil, or niqab, is a hot-button issue across Europe, with different policies in different countries.

The European Court of Human Rights upheld on Tuesday (July 11) a Belgian ban on wearing the niqab in public.

The wearing of the full veil is regulated by a 2011 law that bans "appearing in places accessible to the public with a face masked or hidden, in whole or in part, in such a way as to be unidentifiable".

There is no law restricting the wearing of garments for religious reasons. However, in March 2007, the education ministry published directives allowing directors of public establishments and denominational schools to ban the niqab veil.

France was the first European country to ban the full-face veil in public spaces with a law that took effect in 2011. 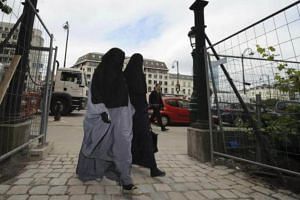 German lawmakers have approved a partial ban on "covering the face".

According to the legislation civil servants and officials, including judges and soldiers, must have their faces uncovered, and people can also be required to remove facial coverings in order to match them with their identity papers.

A 1975 law aimed at protecting public order makes it illegal to cover the face in public places but courts have systematically thrown out local moves to use the ban to outlaw the full-face veil.

Two regions held by the anti-immigrant Northern League, Lombardy and Venetia, have banned the burqa and full face veil in hospitals and public places.

The country's highest court annulled in 2013 a ban on the full-face veil in public buildings that had been decided three years earlier by the northeastern region of Catalonia.